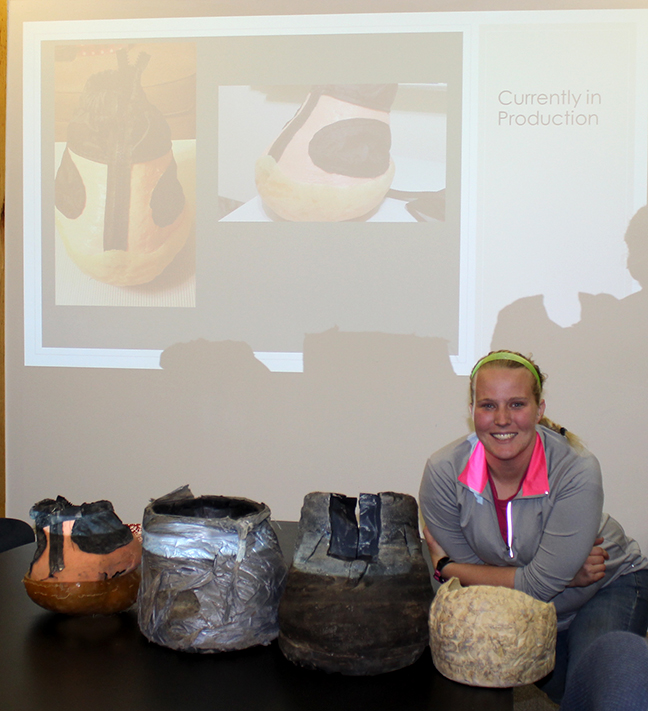 The rhino was dealing with some issues in its front feet, so staff members decided “rhino boots” could be a solution. Bootmaking began for Coco in 2009, but early pairs were cumbersome and heavy.

“Boots have been made by different staff members from various materials,” Briddell said. “The most recent pair created by Christine Bobko, which are clearly the best ones Coco has ever had, weighed only four pounds each. On the other hand, Coco had a pair made from rubber tires that weighed more than 20 pounds each, and they weren’t form-fitted.”

For the full story on Bobko’s first pair of Diceros Boots created for Coco, go here. Briddell arrived at Fossil Rim Aug. 31, when discussions were underway about enlisting Bobko’s help.

That pair was intended to be worn for two weeks straight after being applied Nov. 30, but they lasted one week.

“The stitching on this last pair of boots wasn’t high up enough on the boot, so the (urethane) soles began to separate from the (silicone/Gore-Tex upper) until they eventually came off,” Briddell said. “The idea for the next pair is to extend the sole up higher on the boot, cover up the stitching, cover the buckle system if it is still utilized, put a tongue in to make removing and applying the boot easier and generally strengthen how the urethane adheres to the (upper). Those boots didn’t fail; they were a step forward and just showed what needed to improve. They were the first pair Christine has made for front feet, which involve different movement than back feet.”

“Those boots made it a week, which was a win in terms of being the first model of their kind Coco has had, plus the boots in general are a big development for animals beyond the rhino species,” he said. “The custom-fit part of the first pair was a big step forward, because even after the bottom deteriorated, the upper was still in good shape. Covering the boot stitches is a big deal for the next pair and heavier-grade Velcro will be used. The new pair is under construction and will be on Coco’s feet in the near future.”

Dr. Holly Haefele, Fossil Rim director of animal health, said the first pair from Bobko offered the “best blend of fit, weight and comfort” of any boots Coco has worn to date.

Briddell noted how well Coco handled being sedated when the boots from Bobko were applied.

“Justin kept her in the barn at night for two weeks prior to the November immobilization, and it made all the difference to reduce her stress level going into the procedure because she was used to it,” Briddell said.

Although Coco isn’t out of the woods with her feet troubles, the first pair of Diceros Boots she donned marked a brighter ray of hope than ever before, plus there’s a second pair in the works. Briddell felt fortunate to have been at Fossil Rim during this key time frame for the rhino.

“To be here for Coco receiving the first pair of boots from Christine and see her positive response in the days that followed, it was pretty cool,” she said. “She felt better wearing them, and she presented her feet to us the day they were put on without being asked. I feel she knew they were there to help her, plus they were super padded, so they had to be comfortable compared to wearing nothing on the hard ground.”

The Jacksonville native isn’t shy in her assessment of her time at Fossil Rim.

“This was the best career decision I’ve ever made,” she said. “It definitely gave me a different perspective on animal care, in addition to greater responsibility and experience that I wouldn’t get anywhere else. I learned what animal care is really about, and it made my career decision concrete. After a couple of months here, I knew this is what I wanted to do with my life.”

Some interactions with staff members resonated with her.

“Something Justin said that stuck with me was ‘always put the animals first because you’re here as their spokesperson and to protect them,’” Briddell said. “In my exit interview, Adam (Eyres, Fossil Rim hoofstock curator) said ‘anytime you have a problem, go to your supervisor, state the problem and also how you want to fix it. Always be on top of everything and strive to make it better.’

“The vet staff gave me a quick crash course in how a vet tech monitors vitals on an addra (gazelle), which was interesting. Everyone is very forthcoming with knowledge, and they want you to learn.”

Briddell is embracing her future, which entails becoming a full-time keeper at the Dallas Zoo. She will “get paid to have fun” while tending to giraffes, zebras, ostriches, impalas, warthogs and red river hogs. Briddell has a theory as to why the zoo was interested in her services.

“In a zoo, you have animals considered code blue or code red,” she said. “A code blue animal, like a deer, can hurt you if it gets mad, but you can go in with it if you have to. With a code red animal, such as a gorilla or elephant, you cannot share space with it. To have code red experience as an intern made me a strong candidate on the list of applicants at the Dallas Zoo.

“Having worked by myself with a potentially dangerous animal was the difference maker. I’m 100-percent sure Fossil Rim is the reason I have a job right now.”