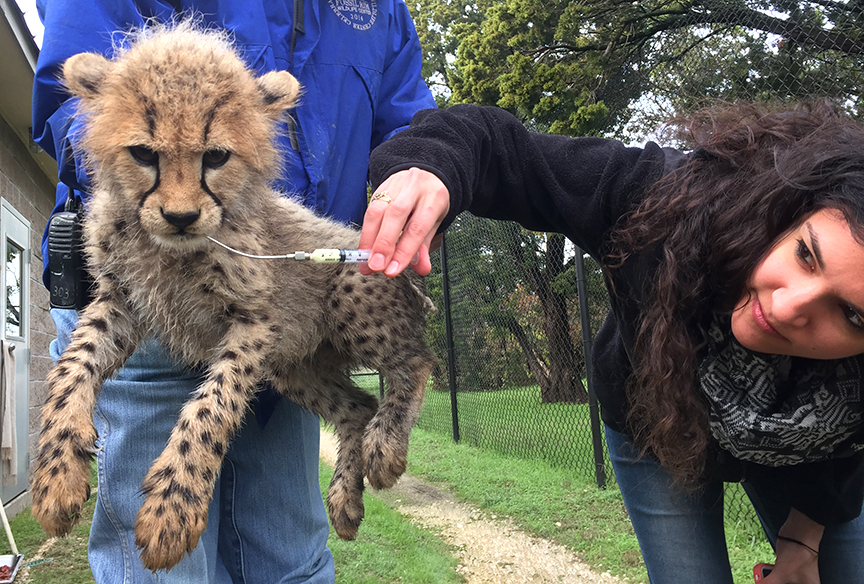 When Rima Kharbush arrived at Fossil Rim Wildlife Center, it marked her first opportunity to gain zoo or wildlife park experience as a student.

Her previous practical knowledge had been gained working with small animals, so it was only appropriate to branch out. Thus, after six weeks at the facility the veterinary preceptee from the University of Wisconsin chose to make her departing presentation to staff members and volunteers on the topic of neonatal foal care.

“This is very different than regular veterinary medicine in a clinic,” she said. “My only experience was in small animal care, so I chose this project topic to expand my horizons and especially since I was at Fossil Rim.”

Kharbush pointed out that neonatal equids include domestic horses, Przewalski’s horses, domestic donkeys, wild asses and zebras. A pregnant equid mother should rank from 5-7 on the 1-9 Body Condition Scale.

“On the scale, one is (thin and) close to death, nine is morbidly obese and five is ideal for non-pregnant mares,” Kharbush said. “For a pregnant mare, you feed them a little more in the second half of the pregnancy. When lactating after a foal is born, that’s when you feed them the most.”

Gestation lengths vary, both between equid species and the individual animals. Twins typically result in abortion in all equid species.

Obviously facing greater threats than their domestic counterparts, exotic equid babies can be standing and moving around just 30 minutes after birth. At that point, nothing is more important than consuming the mare’s first milk – colostrum, or “liquid gold.”

“If you are assessing the health of a newborn foal, colostrum is a big part of it,” Kharbush said. “If you observe a foal nursing within a few hours of birth, you can assume that they’re getting colostrum, which is pretty crucial.”

On a related note, Kharbush explained passive transfer of immunity, which only occurs through the ingestion of colostrum in equid foals.

“At birth, foals don’t have antibodies, which tell your body to respond to disease by attacking it,” she said. “In the environment, you’re exposed to disease pathogens almost constantly.”

“I thought the differences in milk between different equid species, such as a Grevy’s zebra and a horse, might be greater than they are,” Kharbush said. “From a cow to a horse, for example, is very different with the cow’s milk being much lower in carbs. It is helpful, because a zebra foal would be able to drink the milk of a domestic horse, for instance. Although not ideal, commercial equine milk replacer is an adequate replacement for exotic orphans.”

Orphan foals need to be fed every two hours initially with a decrease over time. They need to be fed 10 percent of their body weight early on, followed by an increase to 16-18 percent and then a drop to 11-14 percent over the animal’s first three weeks.

“Daily exercise is important for an orphan, which would get said exercise anyway in the wild,” she said.

While wild equids are weaned at an average of 10-15 months old, an exotic orphan can be weaned after only 4-5 months.

“You want to do it as soon as possible,” Kharbush said. “Otherwise, they can start to become dangerous and kick you or exhibit some other general misbehavior. Ideally, it’s better to lessen human contact and integrate them back into the herd.”

Through the use of “creep feed,” the lengthy transition off of milk or milk replacer can start just two weeks after birth. At about three months old, the creep feed can be gradually reduced and replaced by pelleted feed and hay.

“Neonatal foals that become orphans are at very high risk for a lot of medical problems and potentially won’t survive,” she said. “Failure of passive transfer is a major issue. If they don’t get that colostrum in their immune system, they’re at risk for serious infections and sepsis, which involves bacteria in the blood that can affect any organs. Survival of sepsis by domestic orphans, for example, is about 50 percent.”

As Kharbush said, minimal human contact is ideal when raising an orphan foal.

“You want to try to find (an equid) foster parent, but a buddy baby is also an option,” she said. “That might be another ungulate neonate or maybe a goat or sheep. If the orphan kicks the goat, for example, it might kick back. A buddy baby will help remind the orphan that it’s an animal.”

Completing her Fossil Rim experience Dec. 11, Kharbush said she was headed back to school to perform more rotations until graduation in May 2016. She applied for a rotating internship in small animal medicine and will juggle that with her academic commitments if she’s accepted. From there, she may apply for a veterinary residency.

“I’m not sure where I will end up long term,” she said. “I’m interested in wildlife and exotic pets, but I also enjoy working with cats and dogs. Ideally, it might be a mix of both.”

One thing’s for sure, Kharbush values her six weeks of experience acquired at Fossil Rim.

“It’s been really, really great,” she said. “It’s definitely nice to get away from school and get out in the world to see such a different aspect of veterinary medicine. (Fossil rim veterinarians) Julie (Swenson) and Holly (Haefele) are both great and very easy to work with.

“They seem really good with vet students and are excellent teachers. I have definitely seen a lot of things that you just won’t get to see anywhere else in your life.”