Rhino1000 gathering steam to save a species 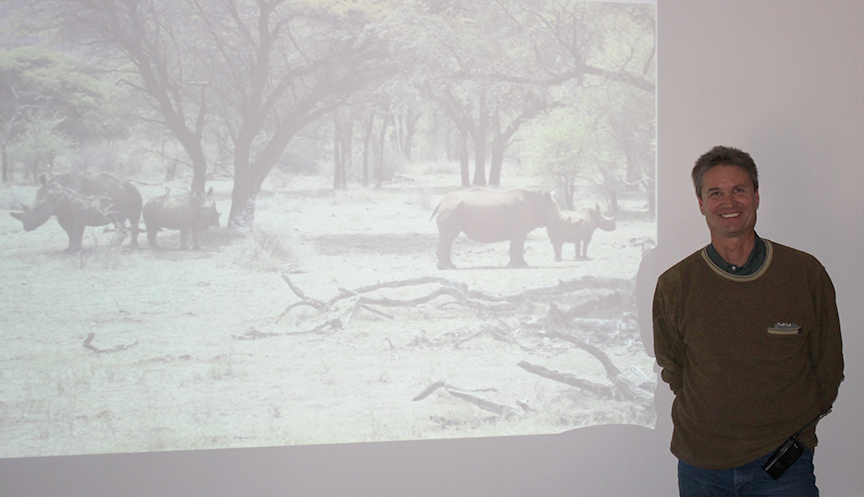 With the white rhinos of South Africa faced with the rapidly escalating threat of poaching at a rate of about four per day, likeminded locals and people across the Atlantic have decided to take action.

The Rhino1000 initiative is in its infant stages after being floated as an idea by the South African software company GroupElephant.com to the USA Exotic Wildlife Association (EWA) – many members of which own exotic wildlife ranches in Texas. Essentially, the name references the desire to help alleviate the rhino poaching epidemic by eventually building a population of 1,000 white rhinos from South Africa on the safer private Texas lands. Eventually, the plan calls for rhinos to be returned from Texas to South Africa.

South Texas quite closely resembles rhino habitat in South Africa in terms of landscape and climate, thus it became a focal point for Rhino1000.

“The only thing carved in stone right now is the desire to get animals out of South Africa and into Texas,” said Adam Eyres, Fossil Rim hoofstock curator. “There are a number of people working together on that, including the EWA, Group Elephant, South African ranchers, Texas ranchers and Fossil Rim among others. We all think it’s the right thing to do. There have been a number of meetings and some collaboration amongst these people about how we do it.”

Austin Savanna’s Justin Gregory will assist Eyres with the rhino population management for Rhino1000 once animals start arriving in Texas.

While Rhino1000 has a nice ring to it, the moniker may be a bit ambitious.

“Aiming to bring over 1,000 rhinos sounded good, plus it made sense because at the time it was initiated there were about 1,000 rhinos being poached in South Africa each year,” Eyres said. “The theory was ‘let’s move 1,000 rhinos so they won’t get killed.’ The reality is that’s a huge number to transport, so we’re really just looking to get this started with some rhinos, not pick a number and see how it proceeds. Regarding our intent, eventually there will be a population of about 1,000 rhinos scattered across Texas ranches as a result of this program.”

Although the black rhino population faces greater threat, Rhino1000 is based entirely around white rhinos.

“The reason being is white rhinos are more available from these South African ranchers to have this plan in the first place,” Eyres said.

Members of GroupElephant came to Texas in March 2015 for the EWA’s annual membership meeting to present the idea. At that meeting, Dr. Pat Condy, executive director of Fossil Rim, was asked by the EWA board to provide advice and his assessment of the idea.

Condy accepted and shared his thoughts in June at a brainstorming workshop in Texas attended by a bevy of interested parties.

In September, a group of Texas ranchers and EWA board members visited South African wildlife ranches inhabited by rhinos. Condy sent Eyres on that trip, and while at the ranches the group focused on discussing project details, viewing the facilities and learning more about the care and handling of these rhinos.

Building trust between the ranchers from South Africa and Texas and securing the partnership with GroupElephant were also crucial components. Eyres spent 10 days there in September, joined by his wife, Janet Johnson, Fossil Rim avian curator.

“Being a part of this is very important to me,” he said. “Rhinos are where I started here (at Fossil Rim). I was the rhino guy for many years.”

Eyres’ first stop in South Africa was at a 40,000-acre facility housing three rhinos. As opposed to Fossil Rim rhinos, Eyres said these animals were very wary of people.

He took a brief foray away from the white rhino focus when visiting WES Enterprises to check out the production of Boskos, a primary game feed produced from natural South African bushveld Acacias and thus a terrific food source for black rhinos also housed at Fossil Rim.

“We were looking at that feed for our black rhinos,” Eyres said. “It would be ideal if we can figure out a practical way to get that feed here where it’s financially feasible, because an acacia-based feed is much more appropriate for black rhinos than an alfalfa-based feed. We used that feed (decades ago), and it’s interesting that it’s still an option.”

The next stop was at an orphan white rhino facility.

“Orphaned rhinos won’t eat on their own because they need mother’s milk,” he said. “If they are less than a year old, you will have to provide milk, as opposed to just sticking them in a pasture to graze. The biggest issue at that type of facility is just keeping them alive nutritionally.”

He visited a game ranch with more than 60 rhinos, mentioning that these animals were much calmer than the initial stop and that nearly every female had a calf with her. From there, it was on to another game ranch, where he met the president of the Private Rhino Owners Association.

“That was a more formal meeting with organized presentations, which was critical for all of us to really explore this issue,” he said.

Along the way in South Africa, Eyres kept a keen eye on the methods of local ranchers regarding everything from fencing to parasite control for white rhinos.

“Fossil Rim would’ve wasted their money if they sent me to South Africa and I didn’t come back with some good ideas for improving our rhino care here,” he said. “Because of my rhino keeper history, when I see feeders, fences, gates and such, I’m looking pretty closely at them. We will definitely be making some changes for our rhinos based on what I learned, but they are to be determined. White Oak (Conservation in Florida) is also working on new fencing options, and financial feasibility for as many feet of fence as we need has to be considered.

“We wanted to see as many different styles of rhino management as possible while we were over there. When the South African ranchers came to Texas, we wanted them to see our management styles.”

“Five South African ranchers we met in September came over here to see what we have on some Texas ranches regarding the potential to care for these rhinos,” Eyres said. “They were here for nearly a full week, and building relationships continues to be crucial in this early stage.”

There is clearly strong interest for involvement among Texas ranchers, who will be making a significant financial investment.

“Once a South African rhino arrives on a Texas ranch, all its expenses would be handled by the landowner,” Eyres said. “Plus, they have to customize facilities on their property for rhinos ahead of time. The funding for the transport over here is another big key, considering it is quite expensive to ship even one rhino overseas. The more rhinos we could transport at one time, the more cost effective the shipping will be.”

While life on a Texas ranch might not be 100-percent safe for a rhino, it would certainly provide a significantly more secure environment. As EWA Executive Director Charly Seale said, “If you can’t take the danger from the rhino, take the rhino from the danger.”

“The South African ranchers acknowledge that we can provide more protection for the rhinos here in Texas through our various law enforcement officials,” Eyres said.

Though much is still to be determined with Rhino1000, Texans and South Africans are on the same page with the welfare of white rhinos at the forefront of their minds.

8 thoughts on “Rhino1000 gathering steam to save a species”