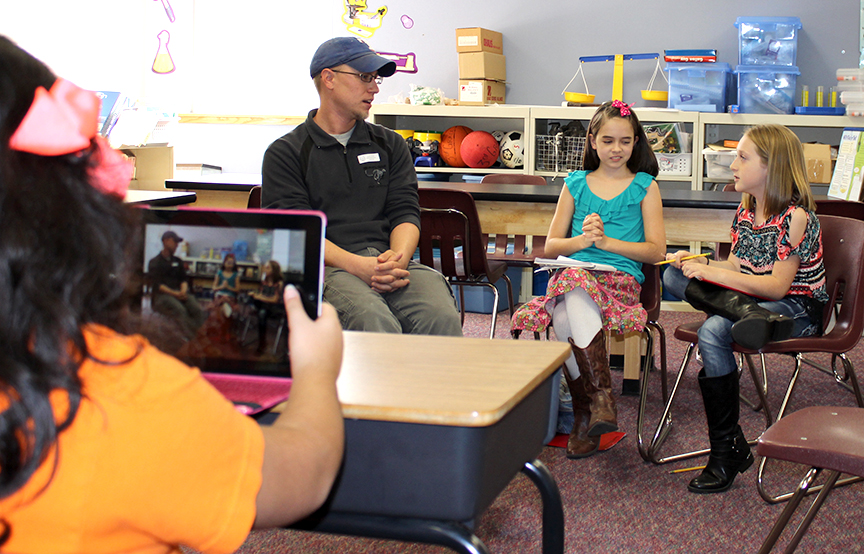 As both a Glen Rose Intermediate School art teacher and a Fossil Rim Wildlife Center volunteer, Jeff Gottfried knew he wanted to see a convergence of the two.

A detailed educational and fundraising plan is in motion during the 2015-16 school year, as his students are enjoying every minute of it by all accounts. After facilitating a variety of Fossil Rim-themed projects in his art classes during the fall, Gottfried invited Fossil Rim staff members to the school Nov. 17 to be the subjects of video interviews by selected students.

“Looking at it from a teacher’s perspective, I wanted to bridge the gap between Fossil Rim and our students,” he said. “It’s rewarding to see it happening.”

From Fossil Rim, Kelley Snodgrass (animal care) and Mark Phillips (education) were interviewed about scimitar-horned oryx, Justin Smith (animal care) and James Morgan (education) addressed rhinos and Jason Ahistus (animal care) and Warren Lewis (marketing) tackled the topic of cheetahs. The interviewers consisted of representatives of the Tiger Council and selected strong students, while members of the school’s multimedia class recorded the interviews with iPads. The students are in fourth and fifth grade.

“I’m very proud, because these kids have worked hard and been excited,” Gottfried said. “It’s a reward in itself to visit with the people who care for these animals. I think the kids involved are learning a lot by asking questions and motivated to share it with others.”

The interviewers impressed with their wide array of questions, as preparation for the day was evident.

“I think these kids represented our school well,” he said. “I know we practiced ahead of time and they took it serious. With Fossil Rim right in our backyard, we should be doing things like this.”

The video interviews will be shown to the full student population during the spring semester, as fundraising efforts will kick into full gear. Each six weeks, a different Fossil Rim animal will be in focus for the entire school.

“When we start showing these videos and adopting animals next semester, I think these kids will be the springboard to get everyone else in the school excited about it and create awareness,” Gottfried said. “They’ll be the leaders. We have big plans for next semester with some fundraising projects for the whole school.”

Hudson White, a Tiger Council member, was one of the students conducting interviews about cheetahs.

“I think it’s fun to learn everything about all the animals and to hear what an expert says,” White said. “Mr. Gottfried gave us some information about cheetahs and we took some questions from that, but we were also allowed Internet access to see what else we could learn.”

Unlike some of the other interviewers, White and his partner conducted questioning off the cuff without any script.

“I knew some of the questions I wanted to ask, but as we asked them a lot more came up that I wanted to know,” he said.

Appreciating the credibility of the source, White paid close attention to his interview subjects.

“You listen a little bit better, because they’re right there (with the animals),” he said. “It feels like you learn more compared to watching TV because you’re focused on what they are saying.”

Among other reasons, White wanted to make a good impression during the interviews to reflect well on the Tiger Council.

“We started having student representatives this year, including me and three others,” he said. “It’s neat to be a part of the leadership challenges.”

Looking forward to the videos being shared with the student body, White seemed to grasp that Fossil Rim is about more than being a “drive-thru zoo.”

“We’ll be proud that we may make a difference in what the other kids think, and they’ll see the hard work we put into this,” he said. “I think if we don’t protect these animals, they could decrease (in population) a whole lot or go extinct.”

“I try to keep my hands still so I’m not moving (the iPad) around a bunch,” he said. “I try to keep as quiet as I can so you can hear them in the video.”

Like White, Gilbreath understood the urgency faced by a number of threatened species at Fossil Rim.

“I think that helping Fossil Rim and getting attention for what they are doing is good,” he said. “For one of the five species of rhino (Javan), I learned there are less than 50 left in the world.”

The students interviewing Ahistus, senior carnivore specialist, left no stone unturned. He revealed his proudest achievement to be when the first litter of cheetah cubs were born at Fossil Rim during his tenure and that he’d endured a few scratches over the years, but never been seriously injured.

“Safety is priority number one when working with animals,” he said.

He was asked how a cheetah’s tail can be helpful during a chase and if cheetahs are born with spots, but his interviewer wasn’t afraid to make hard-hitting inquiries.

“She asked me how I deal with both failure and conflict on the job,” Ahistus said. “These were like real job interview questions.”

Smith, lead rhino keeper, was asked what the primary predator is for rhinos and he illuminated that humans are far and away the main threat. That answer led to an explanation of the huge black market demand for rhino horn driving illegal poaching, despite the fact rhino horn is made of keratin with negligible medicinal effects.

“I enjoyed them asking what I like most and least about rhinos,” Smith said. “It was interesting to hear them ask if rhinos have feelings. Also, I wanted them to understand how big rhinos can be. This took me back to when I worked at a zoo and did keeper chats on a daily basis.”

Smith felt fortunate to be asked to participate in the interviews.

“I’m always for educating people in general,” he said. “The fact this was a younger crowd was definitely worth it, because they’re the ones who are going to end up saving the planet. Their questions surprised me on the depth of what they were asking; they did a fantastic job.

“They did some research to prepare. It’s really nice that someone in the community reached out to us, and we were able to come share what Fossil Rim is doing on a global scale and talk about our animals.”

During a pizza lunch that followed the interviews, Snodgrass, chief operating officer, made sure to thank Gottfried and the students alike for their interest in Fossil Rim and their efforts to prepare for the day.

During his interviews, Morgan, camp manager, was asked what it’s like to work at Fossil Rim and his thoughts on black rhino conservation. Morgan tied in the efforts for the black rhino to the five-point mission of Fossil Rim, explaining to the students how the facility works with zoos and institutions around the world. While asking about the animals themselves, students were also definitely curious about what the various staff members do behind the scenes.

“I told them an amazing fact that an oryx in the desert can let its body temperature rise to 116 degrees due to having an unusual circulation system in its head,” he said. “They are able to cool the blood flowing to their brain through the capillaries in their nose as they breathe, plus they don’t sweat to conserve water. I told them this beautiful animal was allowed to go extinct in Africa 15 years ago. So, it’s exciting to see Fossil Rim being part of the reintroduction efforts in Africa very soon.”

Like every interviewee, Phillips was complimentary of what the students brought to the table.

“One of them had 17 questions,” he said. “I think this project is incredibly fruitful. It gets the kids thinking about real-life job preparation and offers face-to-face interaction with people in their community. It’s great for Fossil Rim to develop this rapport with students. Jeff is building momentum here, and to know they’ll focus on a species each six weeks in a great aspect of his fundraising mission.”

Gottfried had a GRIS parent sit in to observe each of the interview sessions. Lori Gray witnessed the scimitar-horned oryx interviews.

“Our PTA asked for some volunteers to donate their time for this project,” she said. “I was impressed. I thought the kids were really well prepared. I think it connects their learning and their art to the real world – it’s not just something on the Internet or in a book.

“It’s real people who really care for the animals. Mark is from Africa, so he’s seen a lot of these animals in the wild, and he was so passionate when talking about Fossil Rim sending 11 (scimitar-horned oryx) back for reintroduction into their natural habitat. It was a personal connection to what the kids are learning with the people involved.”

“My family is new here, and when I heard Mr. Gottfried was partnering our school with Fossil Rim to bring their themes into our artwork, as well as raising awareness and funds for Fossil Rim, to me it enhances learning as something the kids can buy into,” she said. “Not just ‘we’re going to paint this because I said so.’”

Tessa Ownbey, director of education, recruited the crew of interviewees from Fossil Rim.

“Normally, education and marketing are the face of Fossil Rim out in the community, but I think it’s good for the departments doing the actual work with the animals to go interact with the public. I was very pleased how well that went.”

She’s hopeful Gottfried’s efforts will have an impact on his students in both the short and long term.

“This is an inspired plan Jeff created, and we’re happy to help him however we can,” she said. “Maybe this sparks some interest with kids who might not come out (to Fossil Rim) otherwise. You never know down the road if some of these students will go into an animal-related field after reflecting on past experiences, or maybe decide they want to donate to conservation.

“We’re feeling the connection with the school more than ever this year. They’re always welcoming to us, and it’s been great.”