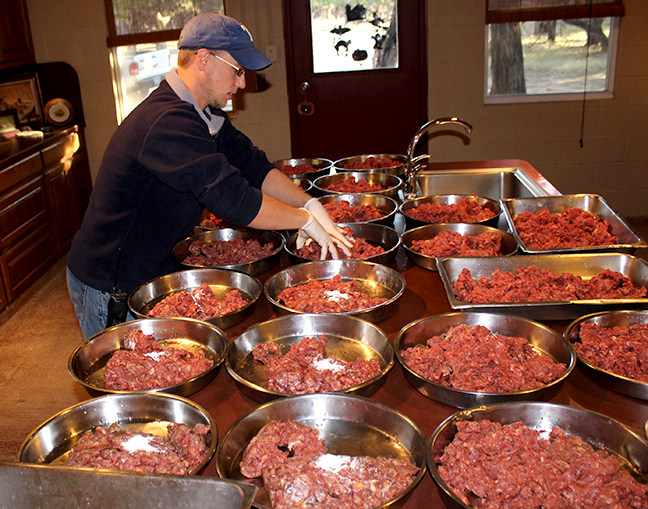 Where do cheetahs live at Fossil Rim Wildlife Center? What’s behind the design of their facilities?

What are the considerations for feeding the carnivores? These are questions best answered by the people who take care of the world’s fastest land animals each and every day.

At Fossil Rim, some cheetahs reside at the Robert B. Haas Family Cheetah Conservancy, aka “Cheetah Hill,” while others can be found at the David P. Thompson Cheetah Conservation Center located inside the Jim Jackson Intensive Management Area (IMA). Both facilities have seven cheetah pens. There are 16 cats on Cheetah Hill and 13 at the IMA.

“Cheetah Hill and the IMA both have their pluses and minuses as breeding facilities,” said Jason Ahistus, senior carnivore specialist. “At Cheetah Hill, we have cameras in one of our yards so we can monitor births and we have pens set up for birthing with no adjacent pens to other cheetahs. That’s great for pregnant cheetahs, because it’s less stressful when they are separated from neighboring cats and reduces potential injury risk or health problems for the cubs.

“The IMA isn’t on the (Scenic Wildlife Drive), so it’s quieter and lowers stress levels for moms. The only people around those animals are necessary staff.

“We don’t have cameras or birthing yards there, so we have to manage the population and prevent neighbors being next to the mom’s pen. You keep her stress level down and minimize risk of injury to the cubs.”

In a worst-case scenario, the separation of facilities would pay dividends.

“It is helpful to have Cheetah Hill and our IMA facility separate in the park,” Ahistus said. “If there ever was a big virus outbreak, we could contain it to only half our (cheetah) population at either facility.”

Interaction with other animal species at both facilities can hold the interest of the cheetahs to say the least.

“Cheetah Hill is actually a boundary between two of our pastures – the Game Preserve and the Main Pasture,” he said. “There is a lot of predator-prey reaction and natural behavior (involving a wide variety of exotic herbivores). At the IMA, the cheetahs react to whitetail deer and other native animals.”

Cheetah Hill has an alleyway spanning the middle of the pens called “Lover’s Lane” and the IMA facility has a similar setup.

“Every cheetah breeding facility has an alley where we can move cats from pen to pen and initiate breeding introductions,” he said. “We move cats through the alley and let them into other yards to investigate the scents of other cats. Then, we watch for both males and females to exhibit certain behaviors and decide if it warrants a breeding introduction. You need to be around the cats and learn their behavior to be able to pick up on the subtleties, which can help determine when a female is in estrus.

“We only introduce cheetahs for breeding when we know a female is in estrus and we see behavior from both sexes. Each introduction is different and many of the management decisions made during this time are based on a gut feeling. There is no way to know how each situation is going to unfold, so sometimes you have to take chances and see what happens.”

In terms of his interactions with cheetahs, Ahistus makes sure to play it safe.

“It’s a mutual respect, as far as how close I can get to each one if I’m moving them or working with them,” he said. “If they don’t like something you’re doing, they’ll give you a warning sign look. But you can’t always know what’s going to happen, of course.”

Once a year, Ahistus vaccinates the cheetahs using a pole with a syringe at the end, as air pressure disperses the medicine through the needle. Calling the cats by name and using food to motivate, in late October Ahistus deftly maneuvered different one-year-old cheetahs at Cheetah Hill through a holding yard, various pens and into feed crushes so he could administer the vaccinations while they fed.

“I’m careful around all cheetahs, but males are more aggressive – especially groups of males,” he said.

Although those one-year-olds are more aggressive toward humans than the older cheetahs at Fossil Rim, they shared food pans without conflict.

“At this age, they still enjoy being around each other,” Ahistus said.

The practical design of the pens and gates at Cheetah Hill allowed Ahistus to move multiple cheetahs at a time and handle the vaccination procedure on his own.

“Our cheetah facility is one of the nicest in the country,” he said. “It was built over 30 years of trial and error, both at Fossil Rim and other breeding centers. It has a variety of pen sizes and birthing yards. It gives us the ability to hold a large number of cats because you need to provide mate variety for compatibility and thus successful breeding.”

While “Bruce” is the most well-known cat on Cheetah Hill, 13-year-old “Jules” in the IMA facility is the oldest female cheetah in the U.S. to have ever reproduced. “Sunshine,” a 15-year-old in the IMA, is the eldest cheetah at Fossil Rim.

“Sunshine is my favorite of all our cheetahs,” he said. “She’s only had one litter, but she’s taught a number of our males how to breed.”

Although the Cheetah Hill facility isn’t small, nothing can compare from a size standpoint to the 4.5-acre yard at the IMA. There are multiple reasons why a cheetah might switch facilities.

“It’s nice to transition them all through (the large IMA yard) at some point to get that room to move,” he said. “Also, switching cats between our facilities has proven to kick-start breeding interest.”

“We are successful because we have large yards, multiple mate choices for both sexes, consistent keepers who deal mainly with the cheetahs and a low level of stress on the animals,” she said. “The presence of two facilities is also key, as (the IMA location) is totally off the Scenic Wildlife Drive. Cheetah Hill has birthing areas and camera capabilities to help us monitor progress.”

Nourishment and other animal care considerations

At Cheetah Hill, there is a building known as the “Cheetah Kitchen” where meals are prepared for those cats along with the ones at the IMA facility.

“We keep the Cheetah Kitchen very clean, both for disease prevention and just wanting to keep the facility well-maintained,” Ahistus said. “We have an industrial dishwasher that gets the water up to 190 degrees (Fahrenheit) to kill any germs on the food pans. We also have black-footed cats and have had other cat species in the past, but it’s nice to have a kitchen designated just for cheetahs because they are so susceptible to diseases. You can still monitor the cats from inside because they’re right out the window.”

Known to be quite finicky eaters, cheetahs need a very lean diet. They are fed a commercially made ground meat diet with a fat content of only 7-8 percent. The meat is stored in a large deep freeze in the Cheetah Kitchen and set out the night before to thaw.

“We feed 2.5 to 4.5 pounds of meat per cat and constantly tweak the amount for each based on their appearance,” he said. “Pregnant cheetahs are fed more, as are all cheetahs in the winter. The majority of the year, we feed them six days a week with a true fast day.

After dividing the meat into portions, Ahistus adds lysine, an amino acid that boosts their immune system to help prevent disease.

“Sometimes, we’ll give them bones or a different meat,” he said.

While they may be vulnerable to disease, cheetahs seem to handle adverse weather conditions well.

“We don’t lock our cats in at night,” he said. “We give them free reign to stay in their yard or go in a building. They make those choices unless there are extreme conditions, but they are pretty hearty and do really well in the cold weather. You’ll see them out in the rain on a cold day.”

Ahistus said that as cheetahs grow older, it doesn’t take a lot to keep them entertained.

“You see a lot of natural behaviors and predatory responses from our cheetah as the various hoofstock species will come up on either side of Cheetah Hill,” he said. “We do give the younger cubs balls to play with – although they’ll lose interest when they get older. For breeding purposes, they’re never in the same yard for too long, so just moving around so often is enriching in itself.”

There are numerous considerations when caring for Fossil Rim cheetahs, but a properly executed plan of action sets the stage for the highest probability of breeding success.