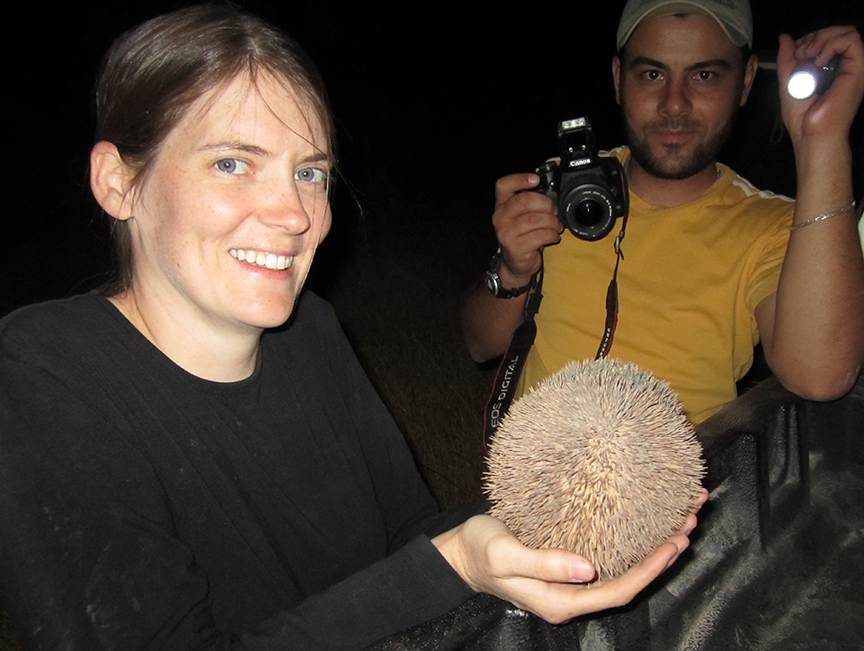 Along her life path that led to becoming a Fossil Rim Wildlife Center associate veterinarian, Julie Swenson got it in her mind to pursue a significant designation.

She was going to put in the time and effort to become a Diplomate of the American College of Zoological Medicine (ACZM).

“In 2007, during my zoo internship at Kansas State, this was encouraged by my mentors there as a good way to specialize in the (zoological medicine) field,” Swenson said. “That’s really when the preparation for the exam began. I was required to have a minimum of six years zoo experience to become eligible, so the earliest I could sit for the exam was 2013.”

ACZM is a specialty board recognized by the American Veterinary Medical Association (AVMA) that certifies veterinarians with expertise in zoological medicine.

“It’s commonly considered to be one of the hardest specialty colleges to get into based on the ridiculous amount of information covered,” said the native of Roanoke, Virginia. “But if you make it, then it’s evidence that you’ve had a particular amount of training in that area.”

Just to attain eligibility to take the exam was a journey in itself. Swenson either had to reach the aforementioned six-year mark or do a three-year, ACZM-approved residency. Prior to that, she needed to complete several one-year internships upon graduation from veterinary school.

She had to be the primary author on five peer-reviewed publications, one of which must be based on her original research. Swenson also needed three references willing to voice their support of her knowledge base and capability to sit for the exam.

“My first internship was a small animal rotating internship where you go through several different specialties, and it was in Springfield, Virginia,” she said. “The next one was at Virginia Tech regarding lab animal medicine. From there, it was on to Kansas State for my zoo and wildlife internship.”

Swenson, who graduated from veterinary school at Virginia Tech in 2004, has been an author on 10 peer-reviewed publications, and one of which was indeed based on her original research.

“At the point I became eligible to sit for the exam in 2013, I really started putting in set study time for it,” she said. “I had support from the institutions I was working at to be able to do so. I studied approximately 1,000 hours for this over the past couple of years.”

Just becoming credentialed to sit for the exam after submitting an application is no small achievement.

“The (ACZM) tells you that you should be proud to get that far, because it is a long process,” she said. “It’s still not the same feeling as getting certified, but it’s definitely a huge first step.”

The exam covers all the major peer-reviewed literature present in zoological medicine, predominately focusing on the previous five years. The required reading list is immense to the tune of approximately 24 text books and 8-10 journals.

The exam, which is offered once a year and spans two days, has a pass rate of about 40 percent annually. With two prior attempts under her belt, a motivated Swenson continued to build her knowledge base heading into the 2015 opportunity.

Day one is the qualifying exam, which consists of five multiple choice sections: avian, terrestrial mammals, herptile, aquatic animals and free-ranging wildlife. She either had to pass all five sections or try again the following year.

“Free-ranging wildlife was the hardest section,” Swenson said. “It covered a lot of statistics and population modeling that we don’t use very often in regular zoo medicine, so it was the most out of my comfort zone. For the same reason, the aquatic animals section was difficult, too.”

Day two brought an even greater challenge with the certifying exam, but at least she was able to choose her specialty among general zoo, free-ranging wildlife, companion exotic animals or aquatics.

“I chose general zoo because it’s the most applicable to what I do, and the broadest topic,” Swenson said. “Wherever I end up in life, I’ll still have a good knowledge base with that.”

The certifying exam consisted of four parts: multiple choice, short answer, practical and essay. She needed to make it through them with a cumulative passing performance in order to become ACZM certified.

“The multiple choice was a nightmare – 75 of the hardest questions I’ve ever read in my life,” she said. “Most people are afraid of the essays, but they managed to squeeze huge amounts of information into the multiple choice where you had to pick the ‘best’ answer, as opposed to a ‘right’ answer.”

Swenson was on her way back home, in anticipation of hearing her test results, when she got word they’d been posted.

“It was actually shock,” she said upon the realization the third time was indeed the charm. “I got the results via email when I was at the airport ready to board my plane. I think I may have scared the people around me, because I certainly wasn’t expecting to find out at that location.”

There were only 157 ACZM Diplomates entering 2015. With Swenson’s class now in the fold, that number stands at 171.

Swenson pointed out this designation isn’t essential for her to practice zoological medicine.

“It’s a wonderful thing to have, but it’s not something that’s for everyone,” she said.

The accomplishment is, however, a source of pride for the Fossil Rim family to see a staff member strive for something more. Swenson has worked at the Texas facility since October 2014.

“I think Fossil Rim is one of the more unique places to be able to work as a zoo veterinarian, as far as having large herds on large, open pastures,” she said. “It’s all different from what I’d previously experienced. This place really benefits the animals in their overall mental state and health; it’s as close to nature as we can give them.

“I actually applied to a position here in 2007, but I was offered a job at the Phoenix Zoo first. It’s kind of weird that I ended up here seven years later, but I’m glad that I did.”

With a proverbial mountain to climb, Swenson appreciated workplace support of her endeavor.

“Fossil Rim staff members in general, and specifically (Dr.) Holly (Haefele, director of animal health), were really supportive of me doing this,” she said. “It’s no small thing to have an organization back you for something this major, and I definitely want to thank everyone. I would not have been able to accomplish this without the support of my mentors and this institution.”