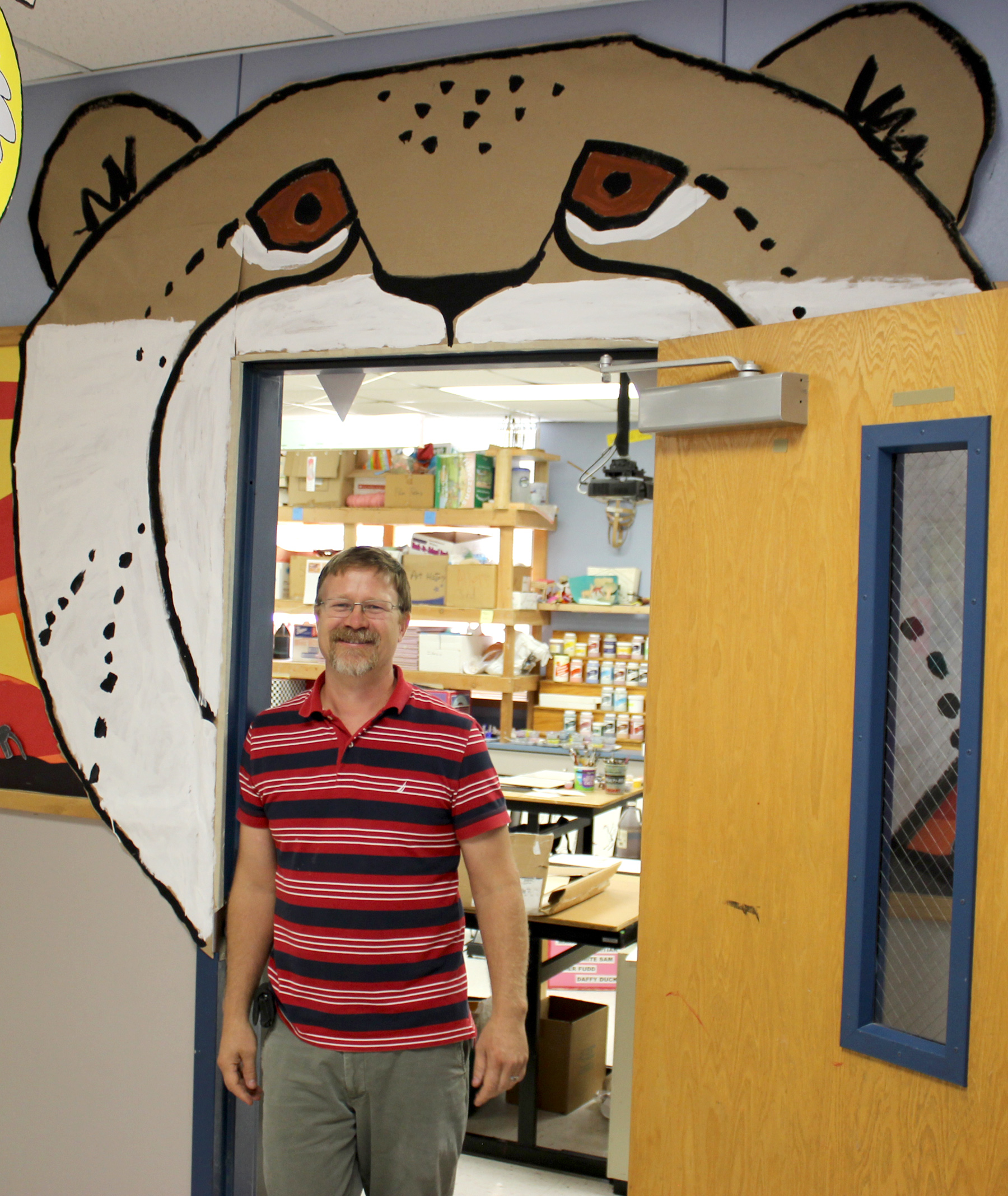 For the first time, Gottfried has put a Fossil Rim Wildlife Center spin on his teachings.

“To learn with a purpose that helps the community and these animals, not just creating a work of art to take home, is important because it motivates the students a lot,” he said. “I think they are learning about what a great place Fossil Rim is and how lucky they are that it’s a part of our community. This is the first time I’ve used a Fossil Rim theme in my classes, and I think it will continue in the future.”

Just a few miles from Fossil Rim, awareness of the facility is high on the intermediate campus.

“All the kids raised their hand when I asked who’d heard of Fossil Rim,” Gottfried said. “Our third graders do a fundraiser carwash for Fossil Rim and then take a guided tour, so I know all of the older kids have been there before. I keep the kids up to date on things like the status of the new cheetah cubs.”

The walls in the vicinity of Gottfried’s classroom are adorned with Fossil Rim-themed artwork from the variety of projects he’s assigned to the various grade levels.

“We’ve been doing these (animal projects) for a few weeks,” said fourth grader Kylie Parsons. “We did puppet shows with the animals from Fossil Rim. We’ve also been doing (sumi-e) paintings, and we have to write a poem about it.

“I like that we get to learn more about these animals while we draw them. It’s fun to learn about animals.”

“These projects are pretty cool and unique,” he said. “I really enjoyed the puppet shows and what we’re doing right now – the sumi-e Japanese art. For our puppet show, we had an aoudad and a Mexican gray wolf.”

Carnes, who said his favorite sights at Fossil Rim are the “bigger animals” like giraffes and rhinos, seems to see the bigger picture about his teacher’s motivation.

“I think Mr. Gottfried is trying to support Fossil Rim by having us do all of these projects,” Carnes said. “We like doing them.”

Gottfried enjoys seeing his students gain a greater appreciation for a place that matters to him.

“Our district continues to emphasize project-based learning, and that’s what this is,” he said. “We’re doing community outreach that matters and getting kids to brainstorm and innovate. That’s what it’s all about.

“The kids couldn’t get enough of the shadow puppets project. Papier-mâché (animal masks are) real exciting to those fifth graders because they can get their hands messy.”

Gottfried mentioned a recent fundraiser for Fossil Rim in which his third-grade students made Styrofoam rhino horns to fit over human noses and sold them during lunchtime.

“We’ll continue to do fundraisers for Fossil Rim throughout the year,” he said.

On that note, Gottfried shared a grand plan currently in its infancy.

“We’re in the process of working out a plan so that, as a whole school, we can continue to do some fundraising for Fossil Rim,” he said. “As a school, we’re hoping to adopt a different species every six weeks. Then, we’d like to have people from Fossil Rim connected with that species to come be interviewed by our student council and technology kids. They’ll produce videos to show at lunchtime, which could help create a buzz on campus.

“We’re working with the cafeteria to create a snack that looks like animal feed pellets that kids can buy and eat. We’re also going to design a paper wrapper for the (pellet) cup, and kids can pay an entry fee to be part of the design contest to raise funds. Hopefully, Fossil Rim will vote on the best one.

“We’ll also do a brochure design fundraiser. The idea is to space all of this throughout the school year.”

Tessa Ownbey, Fossil Rim director of education, was impressed after she paid a visit to Gottfried’s classroom and saw the vast array of artwork.

Creating more awareness of the endangered and threatened animal species related to Fossil Rim could make a lasting impact among Glen Rose youth.

“It’s much harder to teach adults, because their interests are already set,” she said. “It’s essential that we teach kids about these animals. Mr. Gottfried’s efforts in the classroom are very impactful, because he has these kids every day for six weeks in the fall and six more in the spring to reinforce what they’ve learned.”

Like the art students, Ownbey had her own favorite projects.

“All the projects were awesome,” she said. “Personally, I really liked the puppet shows, (papier-mâché) masks and the 3D animal scenes.”

The efforts of a determined teacher got the ball rolling, and now the conservation consciousness of an entire school is on the rise.