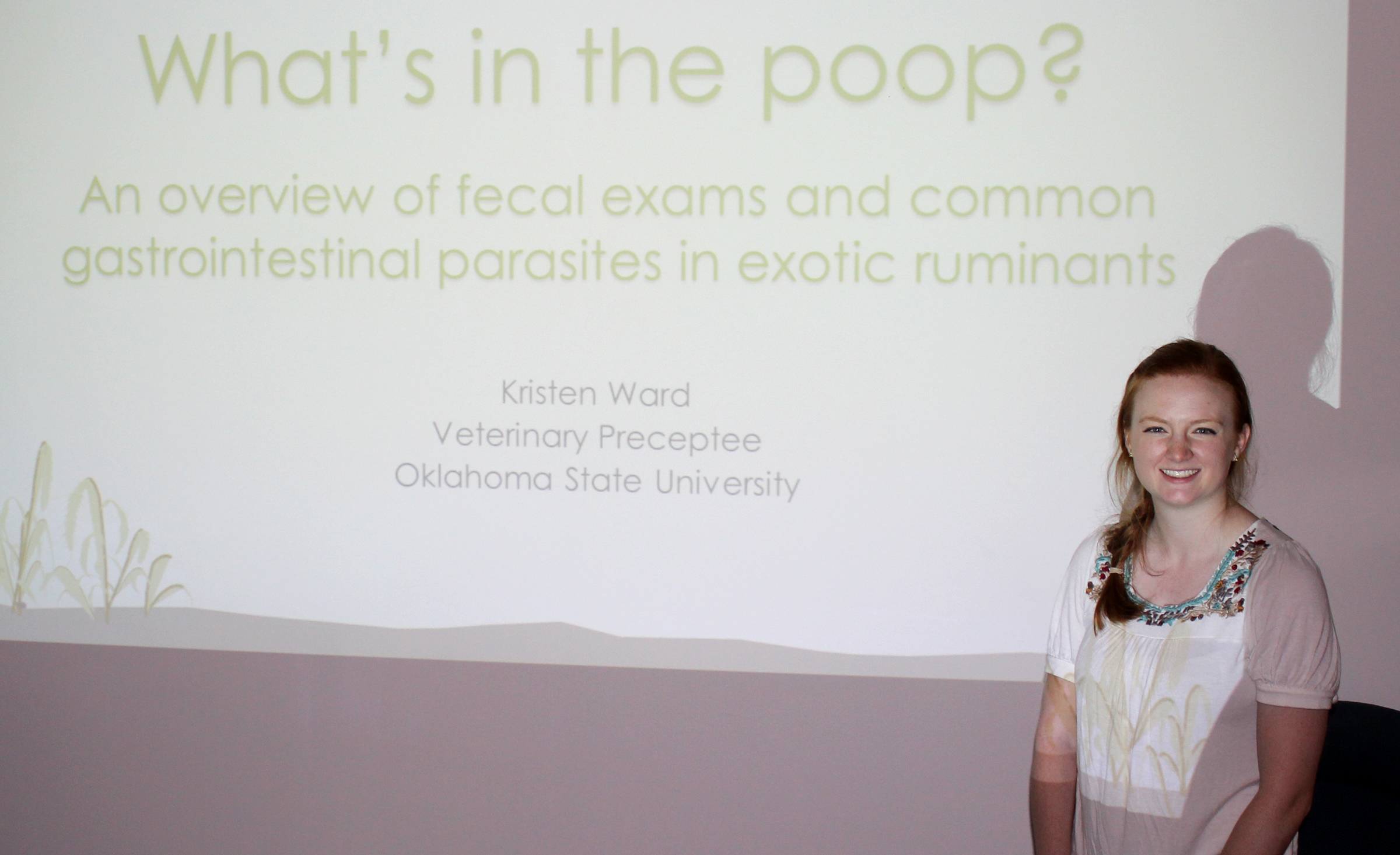 For her lone presentation to the staff and interns at Fossil Rim Wildlife Center Sept. 15, Kristen Ward, a veterinary preceptee from Oklahoma State University, wanted to cover a topic practical to everyday operations.

She delivered an overview of fecal exams and common gastrointestinal parasites in exotic ruminants entitled “What’s in the poop?”

Ward, in her fourth year of veterinary school, is nearing the end of her six weeks at Fossil Rim.

“The fourth year is kind of different, and it’s basically a bunch of rotations,” she said. “Only a certain number of rotations are away from school, so I picked Fossil Rim to spend two three-week rotations. I’m getting a good feel for wildlife medicine.”

She made the call to do a project about ruminants, or mammals with four-chambered stomachs.

“We do fecal exams on pretty much all the species we have here, but I’ve noticed that we tend to do more on ruminant species because they tend to have the most problems with parasites, especially the Haemonchus worm,” she said.

A noninvasive diagnostic test, a fecal exam is a practical part of veterinary medicine.

“Fecal testing is a generally easy way to get an idea of what’s going on in an animal’s body without having to do something invasive like surgery,” Ward said. “The primary thing you are usually analyzing through a microscope is the level of parasites in a fecal sample. If you don’t find parasites in a sample of an animal that isn’t healthy, at least you can move parasites farther down on your differential list – even though you can’t rule out parasitism just because you don’t find anything on a fecal exam – and start looking at other causes for disease. It’s important to do fecal samples routinely and compare findings in the same animal over time, as well as analyze samples from the entire herd.”

“It’s the most commonly used parasite monitoring technique at Fossil Rim,” Ward said. “It’s so simple to do, but you have to repeat the same process every time. The test has a 50-eggs-per-gram sensitivity, so for each egg you find, it means there are 50 present. That’s called figuring out the ‘worm burden,’ and it saves you a lot of time.”

Though effective, fecal exams are merely a means to a preliminary diagnosis.

“Not every parasite you might find will be likely to cause disease, so you don’t need to treat an animal based on fecal findings alone,” Ward said. “Fecal exams may not identify all gastrointestinal parasites affecting an animal. But if you see that an animal doesn’t look well, you can do a fecal sample to assess the situation.”

Ward addressed a vast array of gastrointestinal parasites for ruminants, but some are more prominent at Fossil Rim than others.

“Among the different parasites I mentioned, Strongylids are the primary ones we’re looking for,” she said. “They tend to cause the most significant disease. Strongylids include the Haemonchus and Ostertagia worms. You can’t tell the difference in the eggs between the two under a microscope, but when the eggs hatch you can differentiate them by the larvae.”

According to Holly Haefele, Fossil Rim director of animal health, Haemonchus worms have been the primary parasitic problem at the park in 2015. Due to wet spring weather, recent months have seen the worst infestation of that particular worm Haefele has ever seen at Fossil Rim.

“Each female worm can produce 5,000-10,000 eggs per day, so that number can really elevate quickly in an animal,” Ward said. “If you use a deworming drug, you’ll usually have some worms that survive and send the population numbers back up quickly. The next time you treat the animal with that drug, the parasites may have built a resistance.”

The other primary parasite Ward discussed due to its Fossil Rim applicability is the Ostertagia worm, or “brown stomach worm.” A cool season parasite, its larvae destroy gastric glands.

Ward delved into an array of parasite control strategies, led by deworming. She mentioned that some methods are more relevant to Fossil Rim than others.

“When deworming, you try to limit treatment to only the animals that really need it,” she said. “You can do the McMaster’s fecal and figure out what their worm burden is to decide which animals you treat. If you put dewormer on the animal feed in general, you are just hoping each animal gets the amount of medication it needs. Some members of the herd may not even need treatment.”

After discussing other control strategies, Ward shared a combo she would employ at Fossil Rim.

“I think the best approach is to combine several methods for long-term control,” she said. “I think copper oxide wire particles (given orally) are effective.”

The particles have proven to kill or expel Haemonchus worms, but can only be used to treat an animal in increments of six months or greater.

“I also think it would be interesting to try the use of nematode-trapping fungi, which is a preventative method to reduce nematode larvae in pastures,” she said. “If you were able to target the really important areas of pastures the various animal species hang around in, I think a controlled burn would work well to eliminate larvae.”

On a related note, there is a reason Fossil Rim staff feeds animals pellet food on the pavement.

“When animals are eating feed off the grass instead of the pavement, it just increases the chances of them ingesting parasitic larvae,” Ward said.

At the end of the presentation, the variety of methods to combat Fossil Rim parasites sparked discussion among staff members in animal health and animal care who deal with the issue regularly.

Speaking of the end, Ward is appreciative of her learning experience at Fossil Rim.

“It’s been great here,” she said. “I honestly didn’t know what to expect, because I’d never done any work with wildlife before. I just really love the variety of all the different species here and I’ve learned a lot.”

Set to graduate from Oklahoma State in May of 2016, Ward knows her next steps.

“I will go back to Oklahoma to vet school and begin new three-week rotations until May,” she said. “I would like to incorporate wildlife and exotics medicine into my long-term plan, but I actually got an (U.S.) Army scholarship in my first year of vet school, and so I’ll be an Army veterinarian for at least four years after graduation.”

It may be years down the line, but Ward’s experience at Fossil Rim has at least opened the door to new possibilities in her veterinary career.