Smith elects to represent for rhino 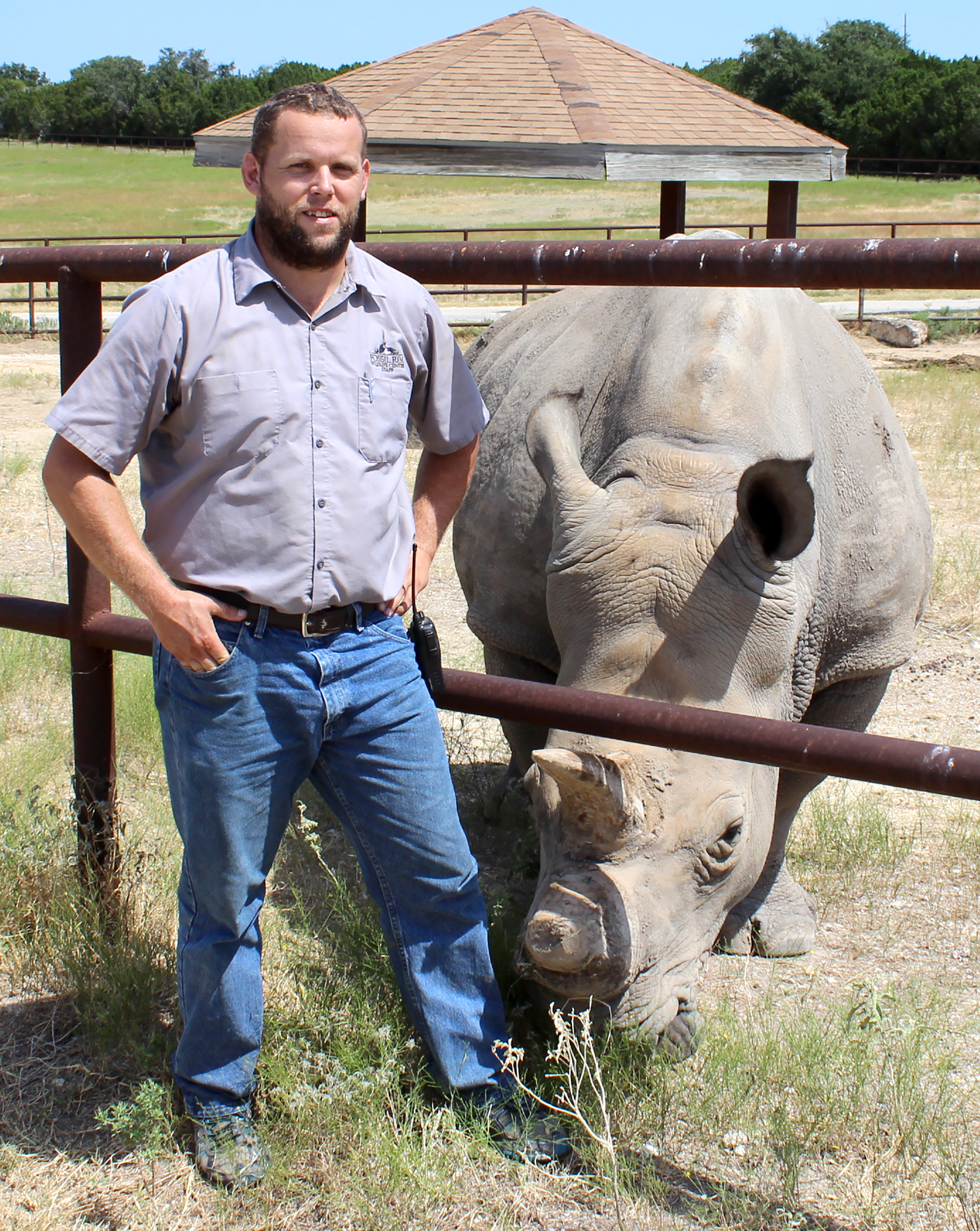 “In June, I attended the International Rhino Keeper Association (IRKA) biannual meeting in Chester, England,” he said. “Fossil Rim hosted their Rhino Keeper Workshop in 2011, which is how I met (Fossil Rim Hoofstock Curator) Adam (Eyres) and ended up coming (to Fossil Rim). I fell in love with this place.”

On the heels of the workshop, Smith – who was raised in Topeka, Kan. – was nominated and then elected to the IRKA board of directors.

“This is a great honor for Justin, and it is a feather in the cap for Fossil Rim,” Eyres said. “The board, which we have been involved with since its inception, is very active in all things that involve rhinos in captivity and works closely with the folks in the field on the conservation of all five species of rhinos. The director of the International Rhino Foundation is their advisor and also works closely with the IRKA board.”

Smith literally got a vote of confidence from his coworker.

“Adam is the southern white rhino SSP coordinator for the (Association of Zoos and Aquariums), and (Fossil Rim Executive Director) Dr. (Patrick) Condy is on the board of directors for the International Rhino Foundation,” Smith said. “Adam and I talked about the opportunity for me to be on this board and represent Fossil Rim further. I know Adam was one of the two people who nominated me.”

Smith knew he wanted to help rhino keepers at other facilities if the opportunity presented itself, which is at the heart of the IRKA’s purpose.

“We have an executive board, and right now my role is the supporting institution membership chair,” he said. “I’ll be contacting a lot of institutions with rhinos to see if they want to donate to the (IRKA) and help out fellow keepers with information on wildlife conservation to better do their jobs. Our organization was founded so information could be shared.

“Different institutions do certain things that are successful in rhino care. We all have different strengths and weaknesses. Here at Fossil Rim, we have big, open spaces, so the rhinos act naturally.”

Smith appreciated the camaraderie and networking during his trip abroad.

“I believe there were at least 17 countries represented, which is very impressive for a small organization,” he said. “With that being said, we have grown to several hundred members. I wanted to be on the board because I saw the things I’d learn would assist our rhino program.

“Other keepers ask questions on social media, and I help them if I can. We discuss care for the geriatric rhinos, and I can contribute because we have a 46-year-old rhino (approximately 90 human years), ‘Edith,’ that overcame some health issues earlier this year.

“I’ve made friends with keepers from all over the world. They’re still talking to me over social media and congratulating me on my election.”

Edith is actually the world’s oldest captive rhino to have ever calved.

Smith also gained some insight during the workshop that helped him back at Fossil Rim.

“We wanted to separate a mother-daughter pair that had been together since the daughter was born (at Fossil Rim) nearly 16 years ago,” he said. “Neither one of them had gotten pregnant in that entire time. We had the suspicion they might be suppressing hormones, and when I addressed it at the keeper workshop, someone approached me and said he’d dealt with this while working with zoos in Europe.

“Getting the confirmation and seeing his presentation of breeding results was very valuable. We separated the mother-daughter pair after I returned from England, and the mother bred with our bull the first day that we put her out there.”

As a board member, Smith will attend annual meetings in Florida, as well as biannual workshops in various locales.

While Smith oversees five white rhinos and four black rhinos at Fossil Rim, he has to assist with the other hoofstock species as well.

“I’m a critical member of the hoofstock team in general,” he said. “It’s a rare day where I only deal with rhinos.”

His animal care career began in 2006 as an intern at Turpentine Creek Wildlife Refuge in Arkansas. After six months, he transitioned to Little Rock Zoo, working with small primates and later, large hoofstock. For nearly six years, he worked at the zoo full time before the move to Fossil Rim in 2013.

“I couldn’t be any happier to have worked my way to this point,” he said.

Since news of his election was announced at Fossil Rim by Eyres, Smith has received numerous congratulations.

“It’s huge to have acknowledgement from your peers, and for me, part of that is our staff and volunteers here at Fossil Rim who have been here for years,” Smith said. “My election reflects well on Fossil Rim, but for a keeper, it’s a huge accomplishment in my career.”

Eyres sees benefits all the way around.

“This is very good for Fossil Rim’s continued support of rhino conservation on the global scale,” he said. “The International Rhino Keepers Association is dedicated to educating and connecting rhino keepers throughout the world to increase our success at rhino husbandry and conservation. Justin has a lot of rhino experience, and his involvement with the IRKA board is going to be very beneficial to them, to him, to Fossil Rim and to rhinos.”

2 thoughts on “Smith elects to represent for rhino”