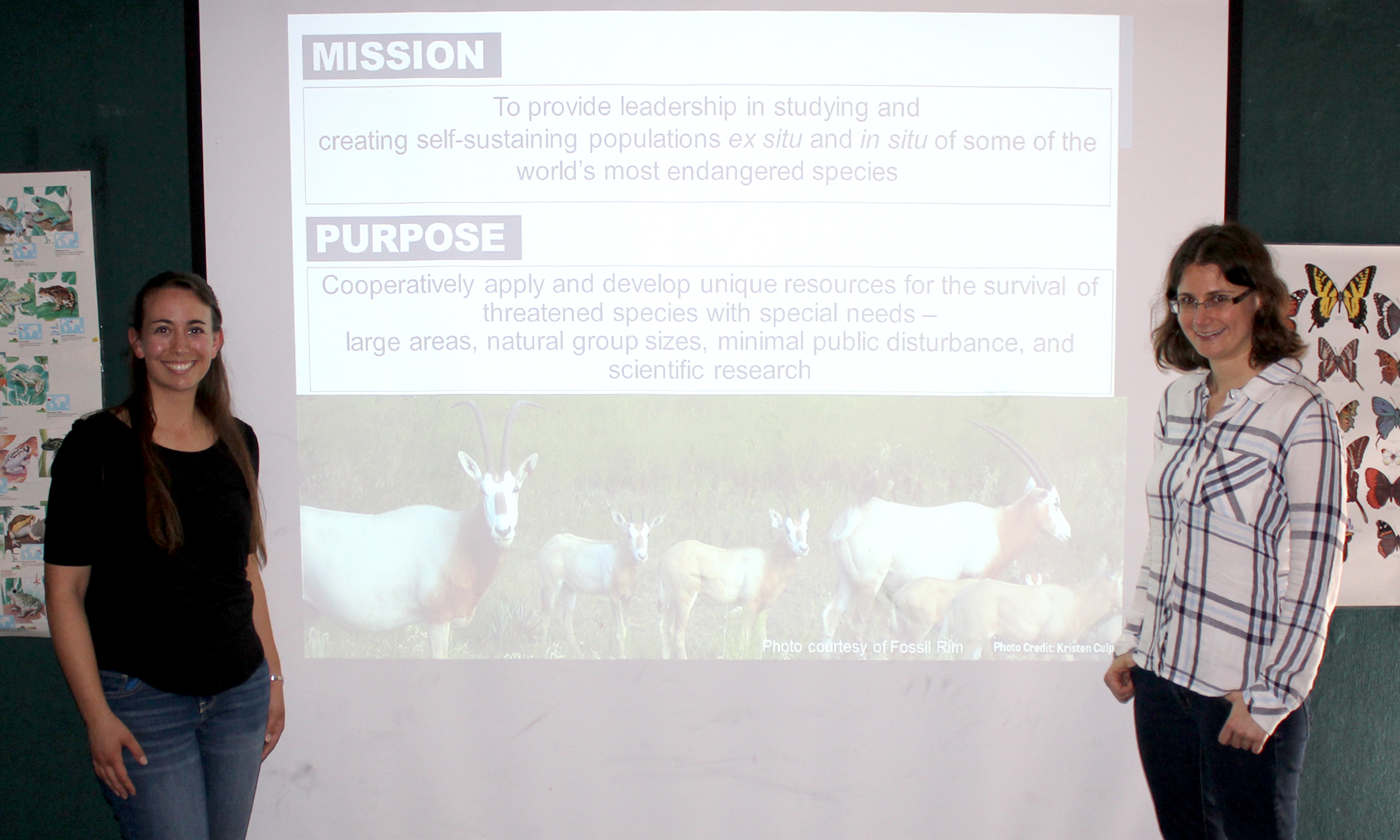 The scope of Conservation Centers for Species Survival (C2S2) extends beyond Fossil Rim Wildlife Center, but with common interests in mind, they work closely together.

During a presentation Sept. 2 at Fossil Rim’s EcoCenter, C2S2 Executive Director Katy Palfrey and C2S2 Coordinator Kristen Culp gave Fossil Rim employees and volunteers a rundown of what their organization has and hopes to accomplish. Culp is also the documents administrator at Fossil Rim, while she and Palfrey both work in the wildlife center’s administration buildings.

C2S2 is a partnership of open-minded institutions working to achieve their mission to provide leadership in studying and creating self-sustaining populations ex situ and in situ of some of the world’s most endangered species. All told, it encompasses more than 27,000 acres of land dedicated to species breeding, study, management and recovery.

The organization held its first meeting in 2005 when representatives from the five founding conservation centers – Fossil Rim, the Smithsonian Conservation Biology Institute, San Diego Zoo Global, the Wilds (Cumberland, OH) and White Oak Conservation Center (Yulee, FL) – converged. Omaha’s Henry Doorly Zoo and Aquarium later became a full member, as did Austin Savanna. There are two more associate member institutions in Florida, as well as one in both Australia and England.

While the nonprofit corporation has an executive committee-board made up of senior staff from the full-member centers, Palfrey and Culp comprise the entire staff currently. Palfrey began her tenure July 1.

“I had previously worked with C2S2 on developing a business plan for its Source Population Alliance (SPA) when I was at business school, and that’s how I got involved with the organization,” she said. “We’re so grateful to (Fossil Rim Executive Director) Dr. (Patrick) Condy for giving C2S2 a home at Fossil Rim. It’s a great place for C2S2 to be taking the next step as an organization, because Fossil Rim is a great example of a center doing a lot of good for these species, and on a personal level it’s really incredible to see what goes on here daily.”

Time management is crucial for Culp, as she strives to perform all her duties for both C2S2 and Fossil Rim.

Kelley Snodgrass, chief operating officer at Fossil Rim, is on the C2S2 board.

“No matter what you do for (Fossil Rim), we’re all a part of (C2S2),” Snodgrass said when he addressed the crowd at the EcoCenter and introduced Palfrey to those who had yet to meet her. “Katy should really help (C2S2) in terms of remaining financially sustainable.”

While the staff may be small, Culp said having diverse conservation contacts is essential to success.

“It’s very valuable to have different people involved with various areas of expertise,” she said. “We are governed by representatives from the full members. Kelley and Dr. David Wildt from the Smithsonian offer a ton of help as our officers. Katy and I have a (conference) call with them every week to work through details and push the programs forward. We also stay in contact with program leaders at the different facilities.”

Palfrey detailed the five elements of C2S2. To achieve innovations in species sustainability, the development of data-driven sustainable models is necessary to address priority species. Regarding natural resource management, an implementation of land management methods that support sustainable wildlife populations and native biodiversity is required.

For capacity building, knowledge sharing between member institutions is necessary – including “staff swaps” and other training opportunities. C2S2 takes an advisory role, wherein consultations are offered for conservation breeding efforts. To support successful species reintroductions into the wild, C2S2 has and will continue to initiate breeding and management studies.

One of the highlights for C2S2 has been the “Big Herds” Project. Through this initiative, C2S2 aims to produce high-quality endangered antelopes that are healthy, socially resilient and use natural resources more efficiently at a reduced financial cost, as compared to the traditional zoo model.

Recent modeling suggested that 2,500-5,000 antelopes were required in a metapopulation – a regional group of connected populations of a species – to avoid inbreeding and maintain evolutionary potential. This meant zoos and C2S2 had insufficient capacity, and animals from the private sector needed to be included in the equation. Therefore, the Big Herds Project is growing into another initiative to create and preserve sustainable wildlife populations over the long term through cooperation between zoos, C2S2 institutions and the private sector.

C2S2 has also collaborated with the Association of Zoos and Aquariums (AZA) and the Cheetah Species Survival Plan Program to create the Cheetah Sustainability Program, which contributes to in situ conservation and high-priority research.

“Fossil Rim was the top producer of cubs for 2013 and 2014 combined among the nine involved breeding centers,” Culp mentioned.

The Avian Sustainability Program has targeted the wattled, hooded and whooping cranes, plus a developmental addition in the loggerhead shrike.

“Relatively little is known about the loggerhead shrike, but there have been successful captive breeding programs in Canada and Virginia, so their methods could be duplicated at other breeding centers,” Culp said.

Culp also detailed a Conservation Breeding Centers for Wildlife Sustainability Course offered in early June by C2S2 and the Smithsonian-Mason School of Conservation that she participated in along with other professionals and 13 students. It was a combination of lectures, discussions, field exercises and demonstrations.

“C2S2’s goal is to create innovative ways of doing things when the current process isn’t working, and initiating that creativity was the purpose of this course,” Culp said.

Palfrey addressed the future of C2S2, as she mentioned the new corporate 501c3 structure that will enable expanded impact, a meeting of the C2S2 board planned for late October at Fossil Rim and the goal to strengthen the aforementioned programs while developing new initiatives.

“Fossil Rim is an ideal location for us to work from when you consider the number of endangered animals in the private sector in Texas,” Palfrey said. “Hopefully, interaction with them will lead to success in further initiatives down the road.”

Culp appreciated the attentive audience during their presentation, as numerous questions followed.

“It was really encouraging to have a captive audience learning more about what we’re trying to do,” she said. “We were able to explain in-depth what we’ve been striving to accomplish.”

To learn more about C2S2, check out conservationcenter.org.