When nature calls for an upgrade 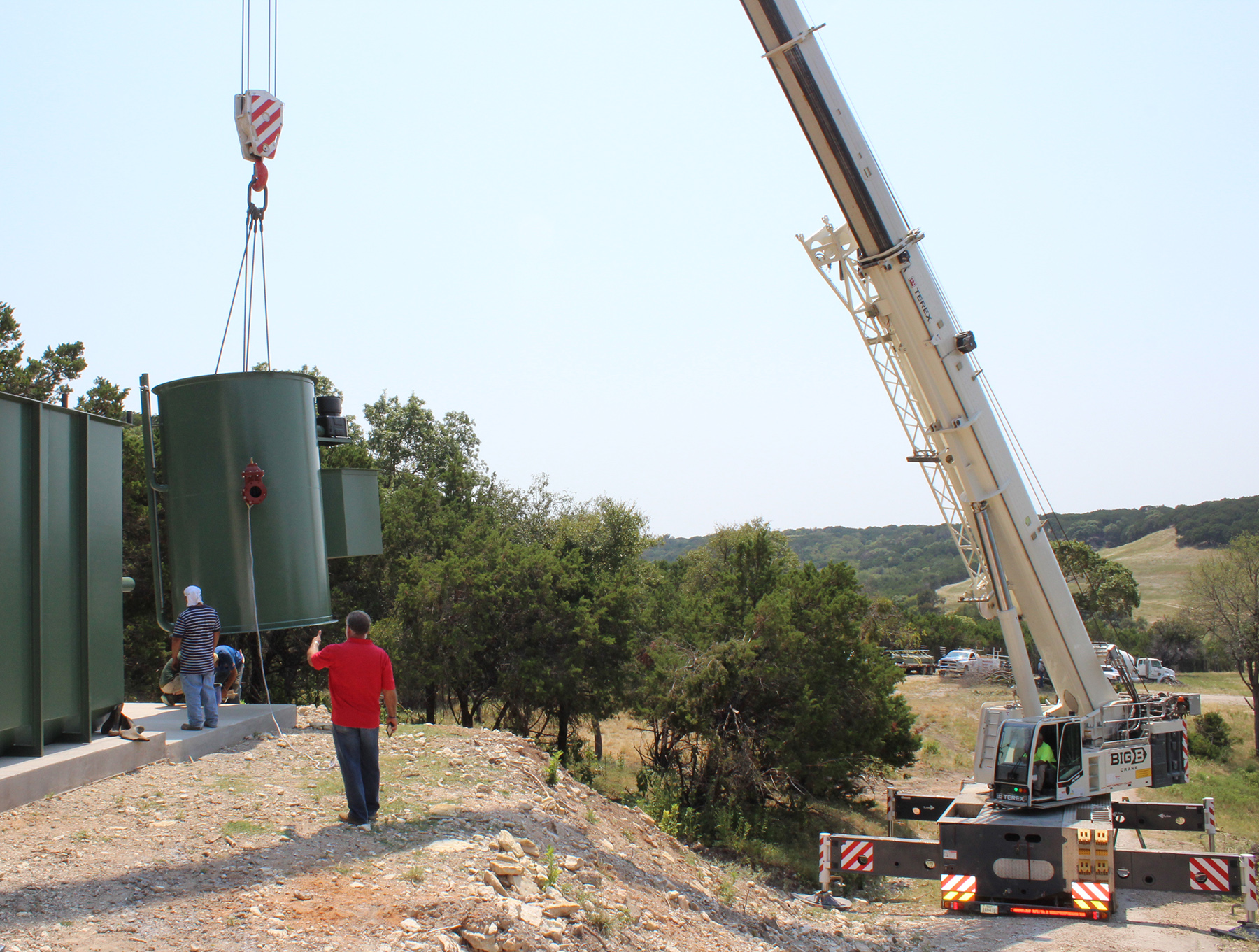 The hillside below the Nature Store bustled with activity Aug. 28, as a package sewage treatment plant was placed upon a concrete slab via a 170-ton capacity hydraulic truck crane.

“This will turn the sewage from the Nature Store into clean water,” said Cleve Weyenberg Jr., president of Tex Tech Environmental, Inc. “After using the crane to pick the two tanks up off the trailer and set them on the concrete slab, we made all the connections and put the plant into operation.”

The plant sits right beside the outbound Overlook road, which closed in December of 2014, approximately 100 yards below the Nature Store. It is capable of treating 8,000 gallons of sewage per day.

“It’s state-of-the-art, but it doesn’t need to be high tech on the level a large municipal facility would require,” he said. “The water coming out of it is clear, odorless and disinfected with tablet chlorine.”

The engineers on the project were the Stephenville-based Consulting Environmental Engineers, Inc.

Weyenberg shared the general process of the plant he manufactures.

“The larger rectangular tank is the aeration basin, while the smaller circular tank is the mechanical clarifier,” he said. “In the aeration basin, sewage comes in and air is pumped into it through diffusor assemblies that keep all the waste suspended in the liquid. That way, the bacteria that require oxygen to live are allowed to break down the waste. The clarifier has mechanical rakes that sweep the bottom of the floor, which is tapered toward the center.

“That was done by the concrete we poured in after the clarifier was placed on the slab. There is an eight-inch sludge well in the center at the bottom of the clarifier.

Floating material in the clarifier is swept by a surface skimmer into the scum trough for return to the aeration basin via the airlift scum return.

A six-foot portion on one end of the aeration basin is actually the aerobic digester. When too much activated sludge has accumulated in the plant, the activated sludge from the clarifier will be returned to the aerobic digester for storage. Once in the digester, the sludge is allowed to settle, leaving a clear water blanket above the sludge, which is then removed via an airlift pump leaving only the dewatered sludge in the digester for storage.

This marked the first time Weyenberg had done any work for Fossil Rim.

“This and all of our wastewater treatment plants were built at our facility in Burleson,” he said. “In all, it was a three-month construction process. We needed a couple of days to get everything set up here.”

In regard to operation of the plant, it will be managed and maintained by a TCEQ licensed wastewater treatment plant operator.

“A TCEQ licensed operator has attended the required classes and passed the certification test for whichever license they hold, and continuing education is a requirement to maintain your license,” Weyenberg said. “That person is responsible for the operation and maintenance of the plant.”

Weyenberg looks forward to a return to Fossil Rim.

“If Fossil Rim has future wastewater treatment needs, I would hope to have another opportunity to work with them,” he said.