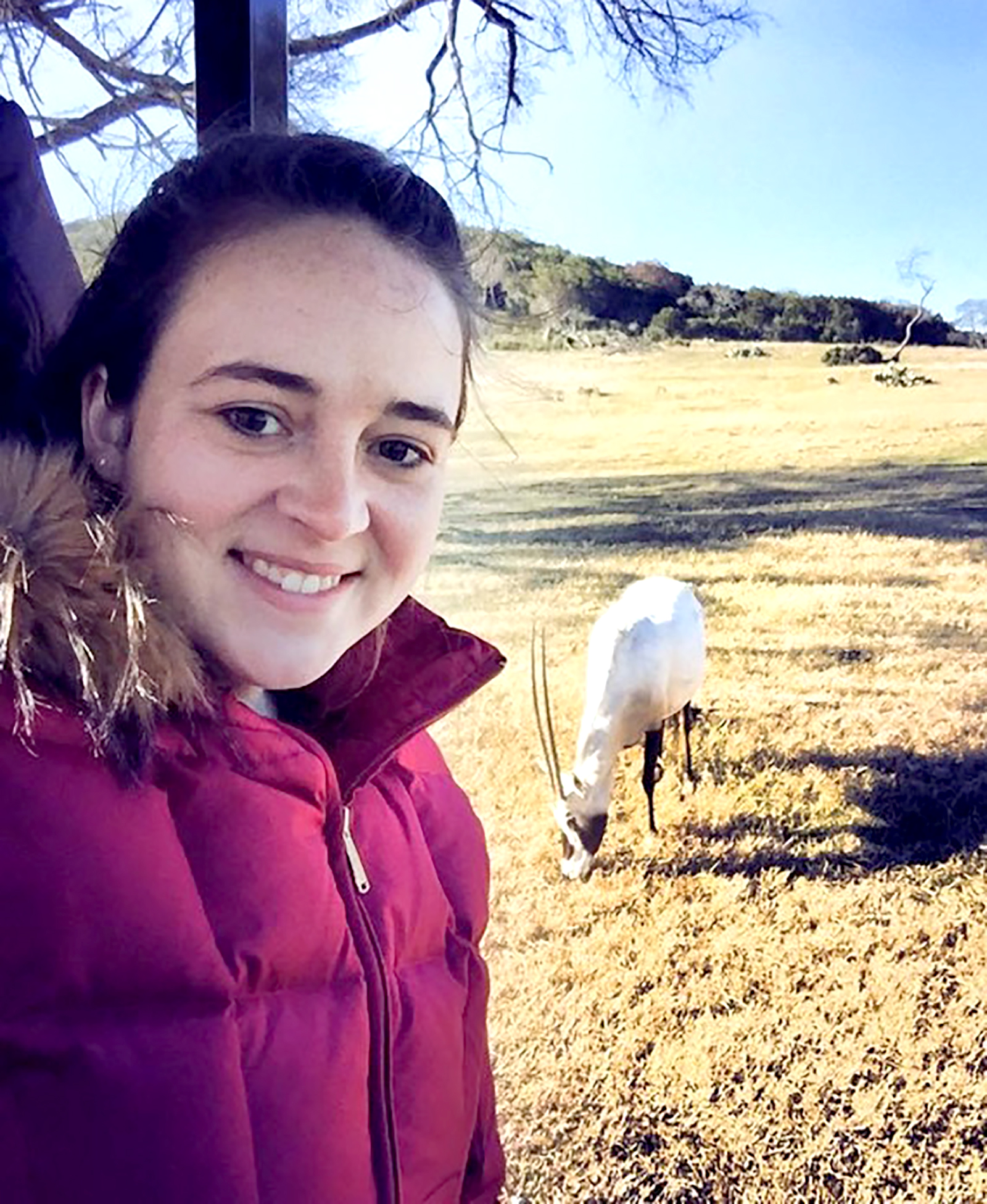 After years of study in the classroom, Codyrose Bowden applied what she’d learned in a practical setting – the Game Preserve at Fossil Rim Wildlife Center.

A 2014 graduate of Auburn University, the zoology major and art minor arrived at Fossil Rim in January as a hoofstock intern. Previously employed at a zoo and then a wildlife rehab facility, Bowden tackled a research project about the social cohesion of an Arabian oryx herd to better understand the implications for breeding and reintroduction.

“All hoofstock interns are required to complete and present a project,” said Bowden, who addressed her coworkers during a lunchtime presentation Aug. 19. “No previous intern had done a project on the Arabian oryx, but Fossil Rim (administration) wanted one of us to because they were considering getting a new bull at that time.”

Although not specific to the Arabian oryx, a bull suitability survey had been previously developed at Fossil Rim in 2012 as part of the Sustainable Herds Project of the Conservation Centers for Species Survival.

“The survey was designed for the sending institution to give Fossil Rim hoofstock managers another tool to potentially assess if a bull would be a good fit here,” said Holly Haefele, director of animal health. “What happens when a new bull is taken from a zoo and put on 300 acres with a large group of females? Can that individual get the herd bred? How much time does he need?”

Haefele pointed out this survey and the hoofstock behavioral studies undertaken by Fossil Rim interns involved close collaboration with Dr. Jane Packard, associate professor in the department of wildlife and fisheries sciences at Texas A&M University. Her association with Fossil Rim began in 1987.

“Dr. Packard has been instrumental in training our hoofstock interns in scientific thinking and writing, as well as assisting in the design of the behavioral projects,” Haefele said.

Bowden’s study involved observations of 12 females, an intact male and a castrated male from March 17 to May 1. She recorded data on a variety of aspects, including spatial subgroups within the herd.

“I studied the subgroups for 15-30 minutes at a time, considering a range of the oryx being 10 or less body lengths apart,” she said. “I tried to evaluate each individual daily in this regard.”

She observed proximity behavior, in terms of whether the individuals would approach, withdraw or retain within the herd. Bowden took note of breeding behavior such as courtship, as well as conflict behavior.

She saw females bash horns on rare occasions and watched them periodically chase the castrated male until he was integrated into the herd. In fact, the castrated male showed much more togetherness with the females – in terms of proximity – compared to the intact male.

“This particular bull didn’t behave according to what would be considered normal, but he also didn’t have any competition,” Bowden said. “The herd was cohesive except for him. He only showed extended interest in two females, and they were the only two who reciprocated interest. He didn’t exhibit the harem defense or territoriality you would expect.”

Considering familiarity and age, she pointed out that the two males were the newest herd additions after arriving in 2015. At more than 10 years old, the bull was the oldest member and the castrated male was the youngest at less than two years of age.

“A related variable I considered was boldness, in that older females entering the herd first were more likely to be bold and initiate conflict with other females,” Bowden said.

Bowden took her observational data back to the lab and applied it to identify trends. She also created a detailed family tree of the herd.

After an in-depth breakdown of her entire process, she shared some final thoughts.

“The herd was cohesive except for that intact male,” she said. “His lack of harem defense may have been an individual trait, and again the lack of competition must be considered. There weren’t specific subgroups, at least when considering them from 10 or less body lengths.

“Females seemed willing to accept a breeding bull, but I think a bull suitability study would be beneficial at Fossil Rim. Considering reintroduction, I think both genetic diversity and familiarity are important amongst the herd.”

From leaving no stone unturned in her presentation to her construction of intricate charts and graphs, it was clear Bowden knew how to tackle a research project.

“It felt good to apply what I’ve learned in a live setting and be able to draw some conclusions,” she said.

Bowden, who was born in Phoenix and raised in St. Louis, wasn’t sure if she wanted to go into animal care or a field of animal study prior to her arrival at Fossil Rim. A hoofstock intern from January to May, she switched to being a southern black rhino intern until her Fossil Rim tenure concludes Aug. 30.

“I hope to move forward with a career in hoofstock,” she said. “I have an offer from (a) zoo to be a hoofstock keeper, and after this experience I know that is the career path I want to follow.”

Bowden was very appreciative when asked about her eight months at Fossil Rim.

“There is so much to say about my time at Fossil Rim that I couldn’t cover it all,” she said. “It made such an impact on me, in terms of realizing how much I enjoy animal care. Being a hoofstock intern and doing this project helped me realize that I am (specifically) a hoofstock person.

“All the people on the animal care staff are so invested in doing their very best for animals. It showed me how much a keeper can positively impact conservation efforts. The entire staff has been great to work with, and I am so thankful I had this opportunity.”