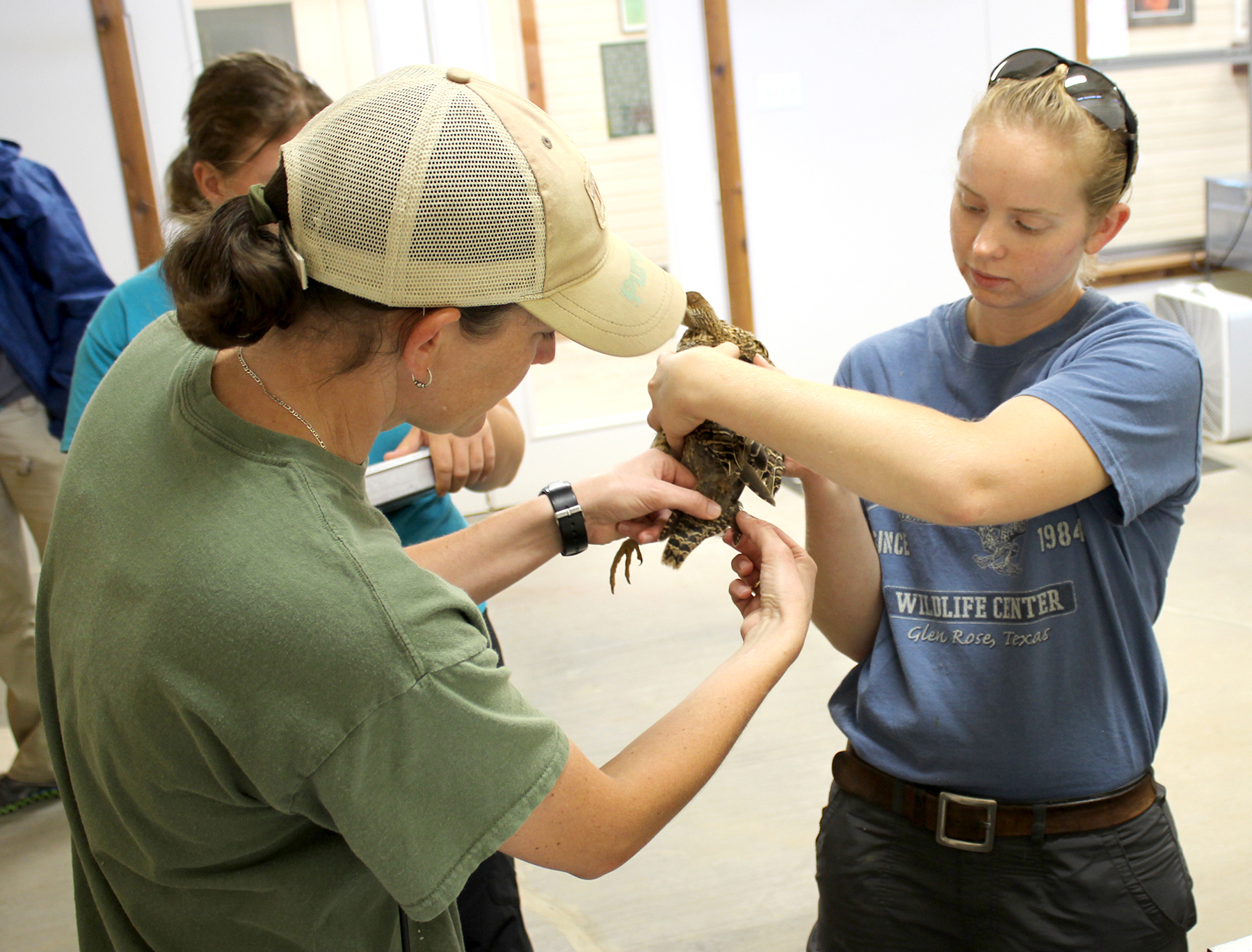 The outlook for the Attwater’s prairie chicken (APC) has been tenuous since it was first listed as endangered in 1967, but in 1992 – in a partnership with the U.S. Fish and Wildlife Service – Fossil Rim Wildlife Center took action in an attempt to help stave off extinction.

The U.S. Fish and Wildlife Service initiated a captive breeding program, and Fossil Rim was one of the original sites. This close partnership continues today.

Mike Morrow, a wildlife biologist with nearly 25 years of experience working at the Attwater Prairie Chicken National Wildlife Refuge, was at Fossil Rim Aug. 13 preparing to transport a batch of the birds. The 10,541-acre refuge, established in 1972, is part of the nearly 200,000 fragmented acres of coastal prairie habitat remaining in southeast Texas.

Inside Fossil Rim’s Intensive Management Area, there is an entire section devoted to the APC.

“I’ve been making trips to Fossil Rim for (more than two decades),” Morrow said. “This is one of four (APC) breeding facilities, considering you also have the Houston Zoo, Abilene Zoo and Caldwell Zoo in Tyler. Fossil Rim and the Houston Zoo are the two primary facilities.”

Morrow said the vast majority of his evaluation of the birds takes place at Fossil Rim.

“We’re taking some wing measurements, evaluating body condition, and putting radio transmitter collars on females so we can find their nests (in the wild) next spring and assess survival post release,” he said. “We’ll put predator deterrents around the nests. Chick survival is the most limiting factor in the wild in terms of making progress toward recovery.

“One of the big issues is the impact of fire ants on the insect community, which the chicks rely on for food. So we’re doing some fire ant management at the refuge.”

Quite familiar at this point with Fossil Rim’s APC staff and veterinarians, Morrow is complementary of their efforts.

“I rely on the veterinary staff to tell me if these birds appear healthy,” he said. “The main thing they look for is a feather problem in the wings, which indicates they might have a hard time making it in the wild. Most of these birds look great, and that’s absolutely a credit to the staff here. The birds here are consistently in good shape.”

“I would also credit Molly Shea,” Burch said. “She normally works in hoofstock, but during chick season she works full time with us at APC. In addition to the hard work by our interns, Molly has also been a great help to Janet and me.”

Burch, in her seventh year with the APCs, oversaw interns Kristina Borgstrom, Ben Jernigan and Catherine Mooneyham during the APC prerelease activity Aug. 13.

“We’ve had two good years in a row for breeding with more than 200 chicks selected for release each year,” Burch said. “We also select 20-30 adults from one to three years old to go the refuge. It’s all based on genetics. The most genetically valuable (birds) will stay here for breeding.

“We’re going to keep about 25 chicks from this year for breeding in 2016. We trade birds with other facilities as needed to create the most genetically valuable pairs.”

APCs at Fossil Rim receive the utmost care. All eggs are artificially incubated, and then chicks are weighed daily. If they lose weight, that’s cause for the veterinarians to visit. For the adults, their pens are double netted to stop predator birds and an electric fence protects against ground-based threats.

“It’s a lot of responsibility, because there are just so few of these birds,” Burch said. “Every egg and every chick is so important. We take pride in what we do. The program is crucial.”

Similar to Morrow, Burch appreciates seeing a familiar face when the time comes for prerelease days.

“This is the fourth time this year Mike visited us for a shipment, and he’ll have to return at least one more time,” she said. “Due to limited space, 56 birds are the most he’s ever picked up at once. A benefit that we have is everyone who is a part of this program, including Mike, has been doing it for several years.

“If we had more turnover, I think it could hurt the chick production. It’s a great group of people working toward a common end goal.”

During processing, each bird is in a breathable bag before transitioning to a wooden shipping crate for the road trip. Every bird receives a permanent, numbered, metal leg band and a deworming, while vets also determine its gender. Holly Haefele, director of animal health, examines each bird and informs Morrow of any issues.

“Once the birds leave here, they’re out of our hands and Mike takes over,” Burch said. “We check all of the (leg) bands to make sure we’re talking about the same bird, because it can get confusing. You don’t want to send off a key genetic bird because of a misidentification.

“When they get to the refuge, Mike will keep the birds in acclimation pens for two weeks. They’ll be weaned off of pelleted food and released into the wild.”

Although caring for the APCs is a year-round affair, Burch pointed out that the job is much more intense in certain months.

“We wait for chick season once a year,” she said. “The males start ‘booming’ (making mating gestures) in February and March, and that’s when activity really cranks up here for us. We put our pairs together and get our first eggs at the end of March.

“Hatching activity peaks in May, and it wraps up in June. Chick season continues into August.”

Sioux Indians developed a dance that mimics the booming, and Burch gets a kick out of seeing the young chicks practice.

“Usually during the breeding season, the adult males will do their dance with the booming and the foot stomping,” she said. “But even with the little chicks, we’ll see some of that adult behavior with the foot stomping. That helps us figure out what sex they are early on. It’s pretty adorable when a tiny chick is stomping real rapidly, and you can hear them in their cages.”

The U.S. Endangered Species Act continues to list the APC as Endangered, and Morrow said the wild population has hovered around 100 during the past two years.

“As far as native species go, this captive breeding program is really important,” Burch said. “Without it, these birds would no longer exist. It’s all about trying to get their population numbers up in the wild. The numbers in the wild may have been stable the last couple of years instead of increasing, but we try to produce as many birds as we can to change that.”