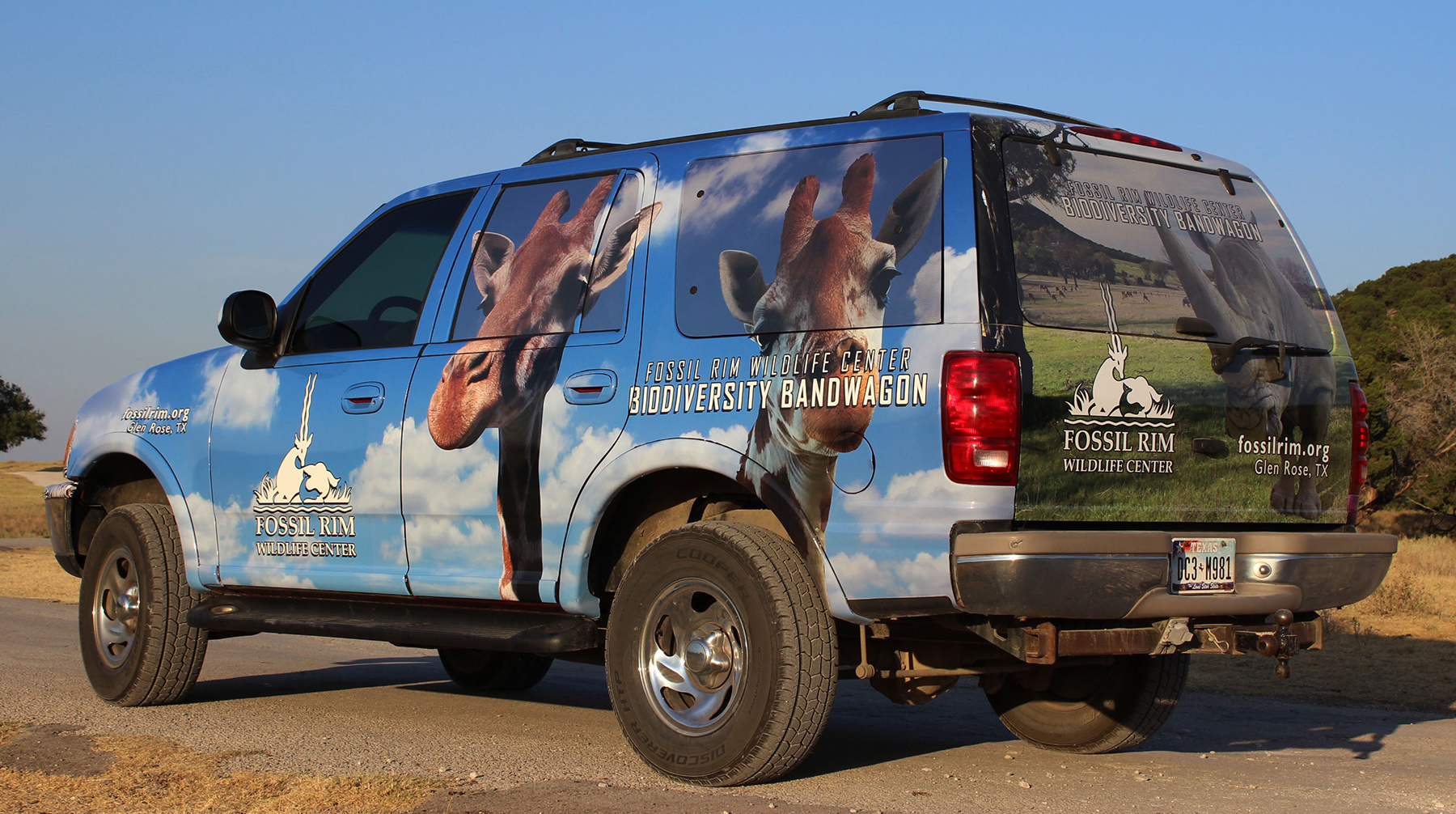 Dan Peters and his family have been enjoying all that Fossil Rim Wildlife Center has to offer for years, but in 2014 they gave back in a big way.

“I responded to the email, saying I had an Expedition and wondering if you all would be interested,” Peters said. “I heard back, and that’s how it ended up at Fossil Rim. I talked with my family, and they thought that would be awesome to go down and see the ‘Red Beast’ driving around.

“They were very excited (Aug. 18) when I pulled up the pictures of what y’all had done to it now. I think it looks absolutely fantastic.”

Indeed, Fossil Rim converted the Red Beast into the “Biodiversity Bandwagon.” It now sports a different Fossil Rim animal – emu, giraffe, southern white rhino and cheetah – on the hood, rear gate and each side.

“It’s the education department’s new addition to help teach people about the importance of biodiversity,” said Tessa Ownbey, director of education. “Runnels Wrap in Cleburne did a great job on the vehicle. Funding for that was made possible by a grant from the National Institute of Food and Agriculture (NIFA), and we’re thankful to the Peters family for the vehicle itself.”

Peters is pleased to see the vehicle put to good use going forward.

“It’s getting a second life,” he said. “It did a lot of good for my family with all of the trips we took in it and the time we spent in it, so it’s great to see someone else get use out of it. Hopefully it is great advertising to bring more traffic down (to Fossil Rim). If you want to see your item put to the best use possible, donate it to Fossil Rim.”

The Biodiversity Bandwagon will travel as part of Fossil Rim’s outreach program, “Rim on the Road.” There are nine outreach programs available to help teach people how to become good stewards of the earth, plus Design-A-Program.

Peters and his wife have a 16-year-old son and a six-year-old daughter. They’ve enjoyed numerous expeditions to Fossil Rim through the years.

“It’s one of our favorite destination spots,” he said. “We haven’t been in a couple of years, but we used to come at least once a year, especially on spring break. We just love the animals out there and the conservation efforts. When you can open the sunroof and have the giraffe come down where the kids can actually touch them – that’s absolutely awesome.

“I can’t wait to get back down there. I haven’t seen the new (Nature Store) or the wolves, plus I’d love to get a closer view of the cheetahs.”

Grateful for the gift, Fossil Rim invited the Peters family to take a Behind-the-Scenes VIP Tour.

“I’m really appreciative of that,” Peters said. “We would love to take advantage of the opportunity, hopefully in a couple of months when it’s a little cooler.”

It only seems fitting that the Peters family would take their VIP tour in the Biodiversity Bandwagon. Everything comes full circle.

“I think that would be really cool,” Peters said. “My family would love to do that.”