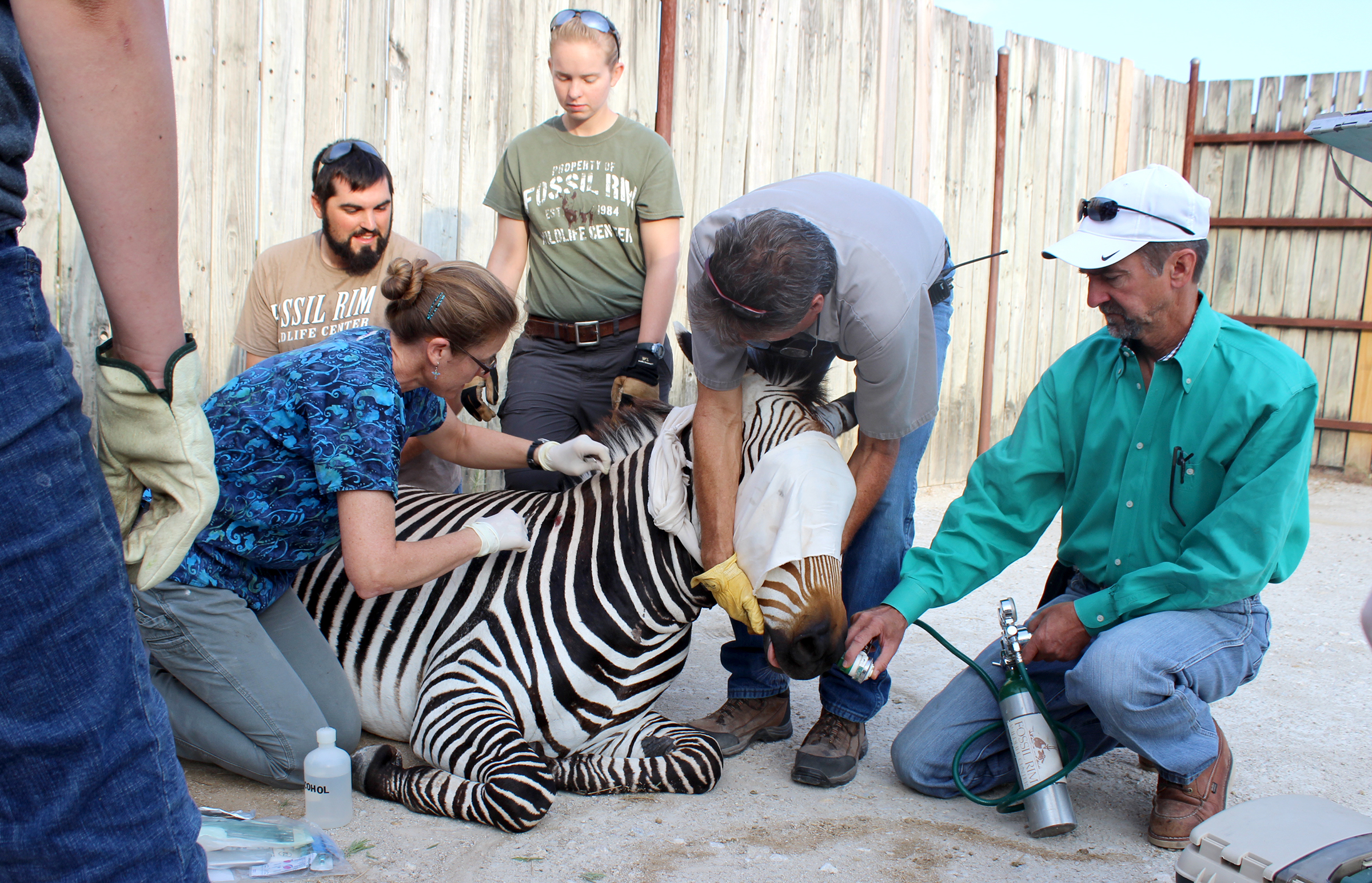 With animal health and safety always a top priority at Fossil Rim Wildlife Center, staff members focus on a well-executed plan of action.

On the morning of Aug. 12, members of Animal Care and Animal Health joined forces to conduct field immobilization and transport of two one-year-old Hartmann’s mountain zebras from the 260-acre Game Preserve pasture to the vet clinic holding pens.

“In the wild, they would get pushed out of the herd to form a bachelor group of males,” said veterinarian Holly Haefele, director of Animal Health. “As they mature, eventually they would try to get their own harem of females. In captivity, they are roaming a (260-acre) pasture, so there’s no room for the young males to naturally disperse.

“We are removing them from the herd so there’s no inbreeding. If there was a big stallion out there, he’d probably suppress those boys and push them away (from the females).”

The first zebra received its immobilization drugs into the rump muscles via a metal dart fired from a Pneu-Dart rifle at 7:30 a.m.

“It’s very important to do this in the cooler morning,” Haefele said. “The animals can easily overheat, so we don’t like to do field immobilizations this time of year. I left a bit of sedation on those guys so they’ll be calm in the pen and not get overheated.”

Contact with the immobilization drugs can be very dangerous to humans, so all staff members involved in handling the zebras had to wear gloves. There were nine or 10 people helping carry each zebra in and out of the stock trailer.

“The drug we use – etorphine – is in the same class as morphine, but about 1,000 times stronger,” Haefele said. “These potent opioids are completely reversible. The drugs act at the opioid receptors, which all mammals have, and attach, but when you give the animals naltrexone it bumps the etorphine off the receptors and completely reverses the sedative effects. A minute or so later, the animal is standing up and essentially back to normal.”

As soon as each zebra went to the ground, no more than five minutes in both cases after dart injection, staff members were on the scene to keep the other zebras away.

“Herd animals don’t like it if one animal is acting different,” said Adam Eyres, hoofstock curator. “It’s dangerous for the herd in the wild because predators will attack. We needed to keep the other zebras off each of these two. There are a lot of things that can go wrong with an immobilization, so deal with one animal at a time and minimize the chance for problems.

“The second immobilization was a bit rougher because we had to try to keep him from going into the woods, but overall it was fine. We’re pretty lucky; it’s not often that we have an issue.”

Dr. Pat Condy, Fossil Rim executive director, begged to differ with Eyres in regard to luck. He simply said the Fossil Rim staff does a great job while relying on knowledge and experience.

Some Fossil Rim species, such as the sable antelope, will essentially go down right where it receives the injection dart.

“Zebras have a tendency to run with the herd after they receive the dart, so you always want to have several vehicles positioned throughout the pasture to keep an eye on them,” Haefele said. “Ideally, you want sedation to occur in a quiet, dark area. Any running or noise keeps the animal awake. The factors are different for every animal, so it’s hard to predict how long it will take.”

As she checked each animal, Haefele cleaned their ears and removed ticks. The zebras’ eyes were covered to help keep them calm.

“We do a full assessment of these animals, because we don’t get our hands on them very often,” Eyres said.

Haefele rode with each zebra in the stock trailer on their respective trips from the pasture to the pens, monitoring heart rate, respiration and ready to apply naltrexone if necessary. Several other staff members came with her to maintain safe positioning of each zebra.

“These two did great, as far as settling in with their anesthesia and continuing to breathe really well,” she said. “When using all opioids, you have to watch how the animals are breathing.”

Haefele pointed out that 25 percent of the etorphine dose for a 600-pound zebra would sedate a 5,000-pound white rhino bull, as rhinos are very sensitive to opioids.

Each zebra had oxygen delivered to its nostrils while sedated. Haefele performed a skin biopsy on the first zebra, but the second one already had a tissue sample taken when it was younger. A blood sample was drawn from both animals.

“As far as the biopsy, it’s for a particular study of Hartmann’s mountain zebras being done by the San Diego Zoo,” Haefele said.

“Holly always takes a blood sample during an immobilization,” Eyres added. “Regarding the biopsy, San Diego’s Center for Reproduction of Endangered Species is looking at the genetics of as many mountain zebras as they possibly can.”

Rachel Gates, who just finished her first year at Cornell University College of Veterinary Medicine, worked closely alongside Haefele. Gates, who is at Fossil Rim for just three weeks, performed a number of assessments on each animal and asked Haefele questions along the way.

“I’ve taken part in five sedations in my time here,” Gates said. “The zebras went down fine and got back up pretty quickly, too. I’m extremely lucky to have come here in my first year and get hands-on experience now before I finish my in-classroom training. I’m glad to work with Holly, and I think this is amazing.”

Eyres said there are 11 Hartmann’s mountain zebras at Fossil Rim and six Grevy’s zebras. While the Grevy’s zebras are endangered, the Hartmann’s variety is in better standing and designated “vulnerable.”

“The mountain zebras were mainly found in captivity on private ranches, and they’ve started to disperse throughout the U.S.,” Eyres said. “While the Cape mountain zebra (another subspecies) is more endangered, the Hartmann’s population has grown while being managed through the (Species Survival Program).”

Eyres credited staff member Molly Shea as the primary caretaker of Hartmann’s mountain zebras at Fossil Rim, considering the Game Preserve is the pasture she oversees.

“They have been doing well here,” he said. “We’re getting ready to bring a new stallion in, and he should be here in 4-6 weeks. For most of our (animal) herds, you can only have one male, so we had to get these guys out first.”

While immobilization and transport are a necessity at Fossil Rim, it’s encouraging to know staff members always plan ahead and keep an animal’s well-being in mind.