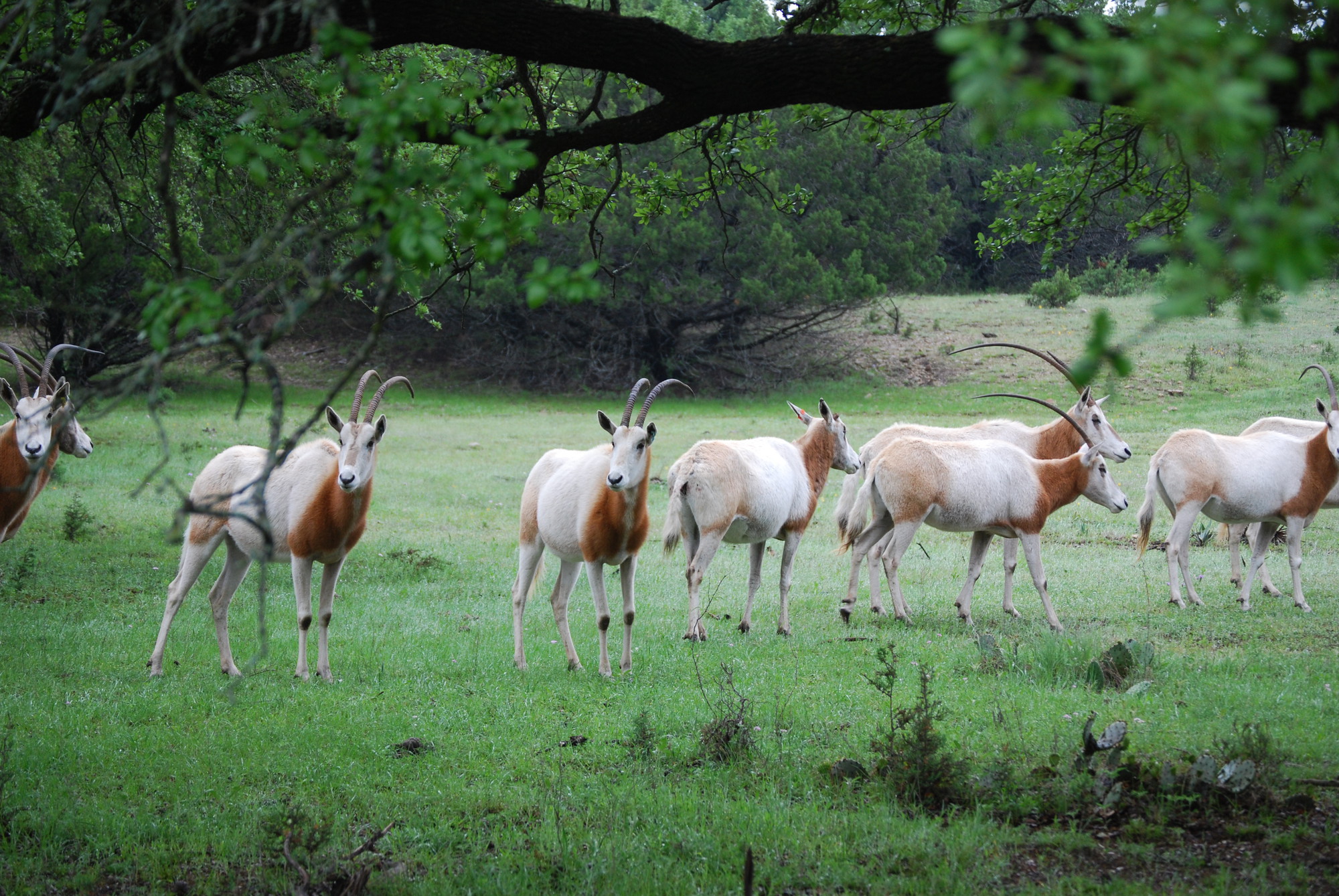 Coated in dust with half a day’s work behind him, Adam Eyres welcomes me to Fossil Rim Wildlife Center west of Glen Rose. As Fossil Rim’s hoofstock curator, he is in charge of anything with hooves. Within the last 10 years he has been working especially close with magnificent creatures crowned with horns that curve from their ears to their backs — the Scimitar-Horned Oryx.

We hopped in his truck and Eyres took me on the scenic route to see the “Scimitars,” as he called them. These oryx went extinct in the wild about 15 years ago, but they have been doing just fine at Fossil Rim. The Scimitars are native to Chad, Africa, but have been present at Fossil Rim since 1985. Currently, 25 Scimitars call Fossil Rim their home, but over the last 20 or 30 years the wildlife conservation center has bred 200 to 300.

For the first time, Fossil Rim will send some of its Scimitars back to Africa to reintroduce them to their native habitat. There will be a few stops along the way.

“In Abu Dhabi they are building what they are calling the ‘World Herd,’” Eyres said. “They already have a lot of Scimitars in Abu Dhabi, now they’re trying to bring in animals from the United States and Europe to enhance their gene pool. From that herd they will select animals to go to Chad.”

“This is a big project,” Eyres explained. “We’re going to have up to 500 animals released over the five year period.”

The organizations plan to bring Scimitars back into the wild in Chad 25 to 50 at a time, with the hope of taking two shipments a year. Eyres has traveled to Chad three times and Abu Dhabi three times in 2010, 2012 and 2014. He said he is very excited and hopeful about the reintroduction effort and thinks it’s very important for others to be excited as well, especially those who are familiar with the Scimitars.

“The older guys remember Scimitars and this is why timing is so critical because these are the guys who need to help make this happen,” he said. “In another 10 or 20 years no one will have known Scimitars in the wild, so it won’t be as important to them. They won’t think, ‘Oh yeah, we miss that.’”

In the United States and Texas specifically, hunting has become a way to conserve the animal, unlike in their natural habitat of Chad where hunting led to their extinction. Some ranches are very good at taking exotic animals, breeding them and making sure that the people who want to hunt them are hunting the correct ones. In January of 2012, the CBS news program “60 Minutes” aired an episode about the Scimitars and conservation efforts and interviewed Fossil Rim Executive Director Pat Condy. He explained how exotic game ranches and the trophy-hunting business in Texas have helped save the Scimitars, as well as many other exotic animals.

With reintroducing these animals into their natural habitat, what will it take to stop them from going extinct again?

“That’s the big unknown,” Eyres said. “They went extinct because they were all killed by man. For these guys, the habitat is still good, the habitat is great. Their problem was, where they lived, was pretty human free until there was civil war around Chad and Libya, and you ended up with a bunch of soldiers and refugees and just people out where there wouldn’t normally be people and those people needed to eat, they needed to survive and the Scimitars lost.”

The EAD funding makes this project interesting because they will be able to monitor the animals very closely. The animals will wear different GPS collars and staff visiting the reserve can check in on the animals.

Although this is not the first time a reintroduction has taken place, if this project is successful, there is an opportunity to continue these efforts with other extinct exotic animals, or at least have a lot of new research to work with.

Eyres will be traveling to Africa once again in October 2015. He hopes to fly to Abu Dhabi and help fly the Scimitars to Chad. He then hopes to be a part of the “sending out” process and plans to stay there for a week or two to watch the habituation. Eyres said he doesn’t think the reintroduction will be that shocking to the animals.

“I don’t think they’ve domesticated, but it will be a little bit interesting to see because they will have to figure out where to go for food and where to go for water,” Eyres said.

It’s amazing to watch these animals travel so effortlessly while never separating from one another. The Scimitars move around as a herd, the only time they are not all together is when a mother is with her newborn baby. The mom’s usually tuck their babies for a few weeks before bringing them out to the rest of the herd.

Another unique thing about the personality of the herds is that the male Scimitars do not get along well so Fossil Rim does not keep two adult males in the pasture at one time. Once the males grow up, they find ranches or people interested in helping the conservation of the animals to give them to. When sending the Scimitars back into Chad, they hope to send out one male with a group of five to 10 females, then wait and send out another group the same way.

Cruising around Fossil Rim and chatting about Scimitars, Eyres tells me about his relationship with them. “It’s funny—I’ve worked with animals all of my professional career and there are those who think animals should have value based on what we think is valuable,” Eyres said. “You know tiger bone has some quality, rhino horn has some quality…if the animal doesn’t have some quality to us, why should we save it? I have always been of the intrinsic value of that they’re here, they’re cool, what gives us the right to kill them?”

Eyres continued: “The thing, not necessarily a good thing, but the thing that makes them stand out [is], here’s a large mega-vertebrate that went extinct in our lifetime, that’s saying something—when we can stand by and say wow, did anyone even notice? All of a sudden there aren’t any and we don’t notice for 10 years. So that is one of the things that really makes you think—what’s next? Could you imagine waking up one day and there being no white-tail deer?”

No, and I can’t imagine a world without the magnificent Scimitar-Horned Oryx, either.