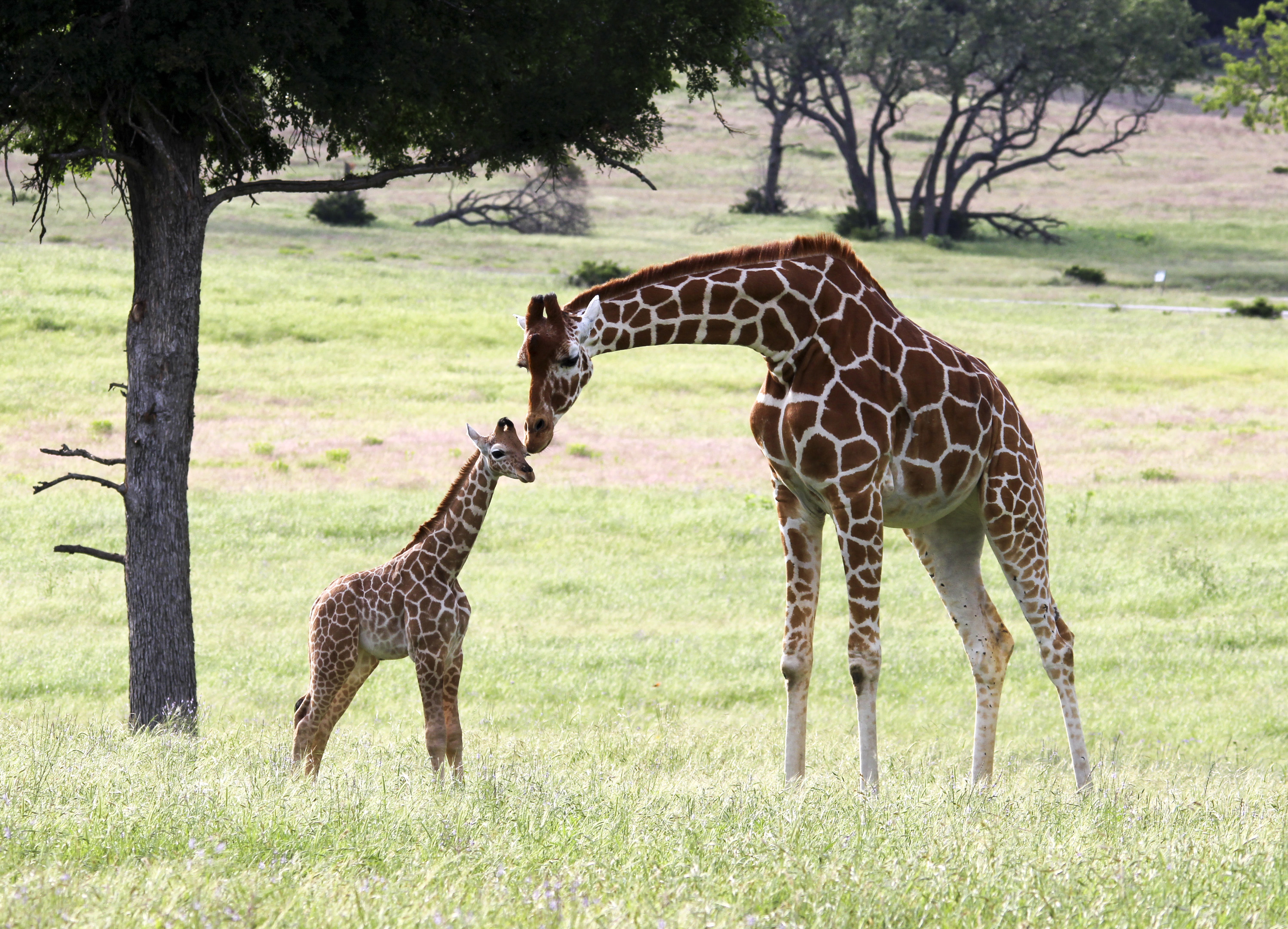 Babies: Sure they are cute, but what will they be when they grow up?

Springtime at Fossil Rim. I first experienced it 16 years ago as a vet student in training; apparently the Attwater’s prairie-chicken chicks were cute enough and the yucca pretty enough to convince me to come back. Now that we manage most of our hoofstock herds to calve in March and April, spring is even better. There are scimitar-horned oryx calves frolicking in the verbena, and roan calves romping amongst the blooming prickly pear.

Sable, addax and gemsbok calves clump like primrose in the Main Pasture and our brand new giraffe calf is growing, well, like a weed.

So, what do all these kids do when they get older? We can’t keep them all, and some go on to do spectacular things.

When the avian department finds themselves with 250ish Attwater’s prairie-chickens in June, you can bet plans are being made for dispersal. Some of the chicks, selected based on genetics, will stay in captivity, perhaps going to another APC breeding facility like the Houston Zoo, to make more chicks next year. The vast majority of the new birds will be released to the Attwater’s Prairie Chicken National Wildlife Refuge west of Houston. They are the going out there to be wild birds, and hopefully carry this critically endangered grouse species into the future.

An equally thrilling adventure awaits some of our scimitar-horned oryx. This species of Hippotraginae antelope is extinct in the wild. But hopefully not for long. An exciting project underway from the Environmental Agency Abu Dhabi and the Sahara Conservation Fund will start releasing scimitar back to their native habitat in Chad this fall. Fossil Rim recently sent several scimitar to Abu Dhabi’s World Herd, a group of genetically valuable oryx that will contribute to the release.

Some of our calves will stay at Fossil Rim to make more calves. This is a fairly basic concept, but it gets complicated. Most males will have to leave the herd, as they would in the wild. These males will either go to other AZA institutions with breeding programs, or get “surplused” to the AZA herd, and sold to private owners. We hold back several female calves in the herd each year to replace the older ones that are no longer reproducing. But we also have to watch out for dad. Typically we are bringing a new breeding bull into the herd about every three years to keep the family tree growing the right way.

Actually, most of the animals have known pedigrees and are tracked by the SSP (Species Survival Plan) for that species and breeding recommendations are made based on relatedness. Recently, actual genetic analysis has become much cheaper and more readily applicable, and scimitar, addra gazelle, addax and sable all have genetic research projects underway that will positively impact the management of these species very soon. In fact, the initial addax work done at San Diego Zoo Global on our herd directly impacted a young male that was initially surplused and headed for sale. Because the SSP makes decisions based on pedigree, and there are some unknown details in the pedigree, worst case scenarios are assumed (it is “safer” to assume some relatedness, that way you keep genetic diversity maximized) and this little guy was not making the cut. But when the researchers actually looked at his genes compared with the rest of the addax, he was way more genetically valuable than the pedigree proposed. He rose to the top, and became a breeding male for the managed SSP population.

When animals are surplused, they continue to serve the wider population. Private animal holders are an extremely important part of species conservation, especially in the hoofstock world. There are about 4000 scimitar-horned oryx on ranches in Texas; another several thousand addax. Zoos and wildlife parks just can’t house enough individuals when large numbers are so important. A new collaboration, the Source Population Alliance, a C2S2 initiative, recently launched and brings valuable conservation partners together. Marrying the research that goes on at many AZA facilities with the large populations maintained in private hands, may be the only way to ensure the existence of species, like addax, that will likely join the scimitar’s extinct status in the very near future.

So yeah, the babies are cute. But seeing them fulfill their roles in species conservation is what makes spring my favorite time of the year.