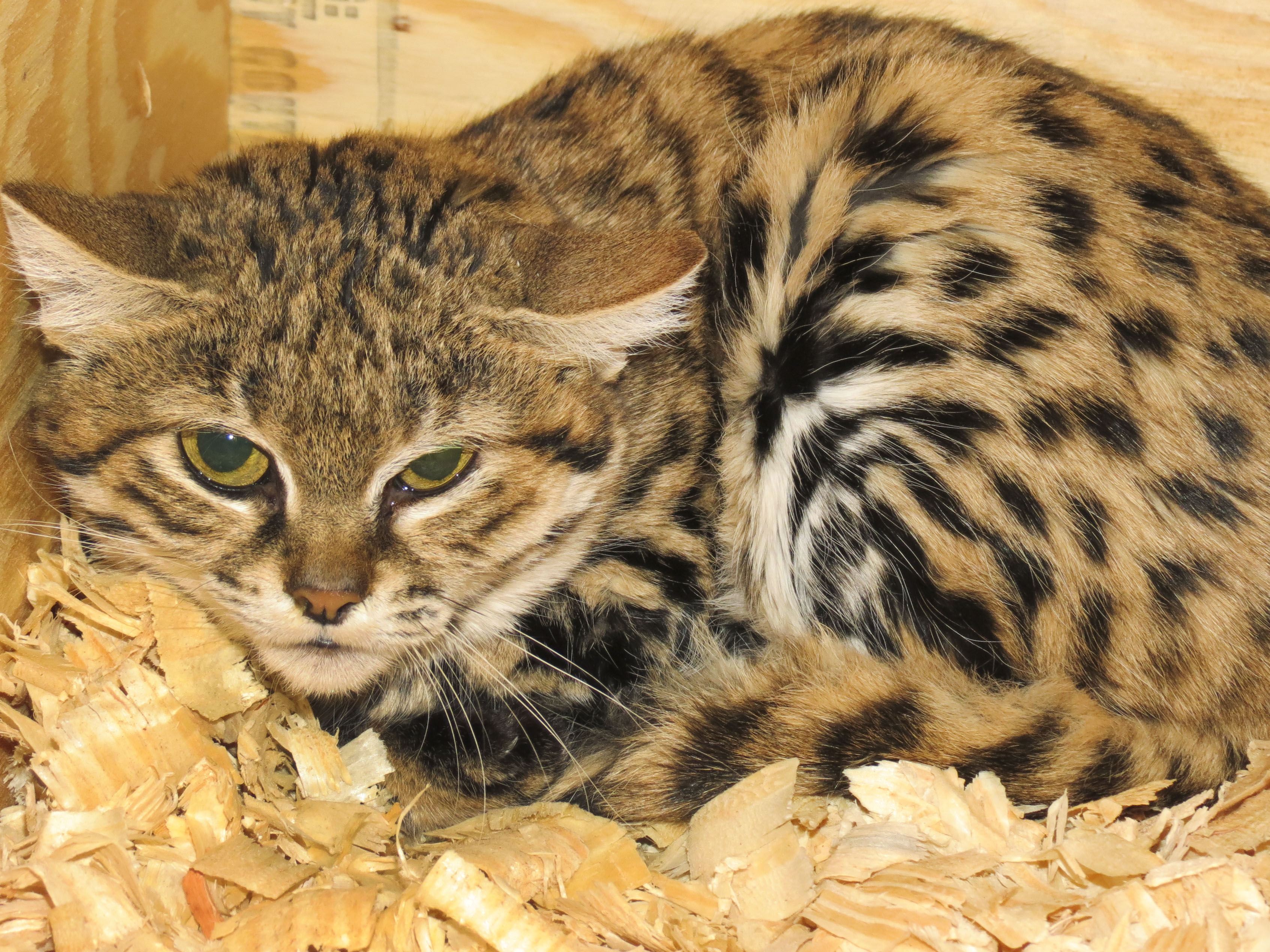 I am pleased to announce the addition of a new carnivore species to Fossil Rim’s animal collection: the black-footed cat. This is the first carnivore species we have added since 1994. That may sound surprising to most people, but unlike many animal facilities, Fossil Rim focuses on just a few carnivore species. For over 25 years, Fossil Rim has been involved in the captive management of the red wolf, Mexican gray wolf, maned wolf, and cheetah. This allows our animal care staff to “specialize” in all aspects of their husbandry, which has proved to be very successful for two of the more difficult species to manage: the cheetah and maned wolf. Our newest addition, the black-footed cat, is another difficult species to manage in captivity, but we hope to have the same success with this new breeding program as we have had with our other carnivores.

Since then, they have been adjusting to their new surroundings in our intensive management area (IMA). This past week, we finished introducing the two cats together and we hope they will soon establish themselves as a breeding pair. Morgan and Latika have settled in very well and we have now opened their area up to visitors, but before you come out and see them here is some information about our new species:

The black-footed cat, Felis negripes, is among the smallest cat species in the world. Weighing in at only 2-5 lbs and measuring 14-20 inches in body length, these tenacious, little predators are the smallest felines in Africa. Black-footed cats, also known as small spotted cats, have a tawny coat covered with black-brown spots which merge to form bands and rings on their chest, legs, and tail. Their short tails have 2-3 dark rings that end in a black tip. Unlike other spotted cat species, their skin is unpigmented pink.

Black-footed cats are indigenous to the southern parts of Africa and are only found in three countries: Botswana, Namibia, and South Africa. They are mainly found in scrub desert regions, but will also reside in grassy or sandy plains. They have special adaptations to survive in this hot, dry environment. The black-footed cat’s name comes from their black pads and dark fur on the underside of their feet which protects them from the hot sand. They have a broad skull with large, rounded ears that give them excellent hearing in scarcely populated prey areas. Their ears are low-set and flattened in an aggressive posture which is an adaptation to help them blend in while hunting in areas with limited cover. Living in an environment that has less than 500mm annual rainfall, these cats don’t require a lot of water and get all of the moisture they need from the prey they consume.

Despite their small size, they can be quite aggressive and have been observed defending themselves against black-backed jackals, an animal that is 8 times larger in size! Black-footed cats are also very skilled hunters. They utilize three different hunting techniques: 1) A sit and wait approach where they will sit outside of a rodent burrow until a rodent emerges (sometimes up to 40 minutes); 2) A fast moving hunt that startles and flushes prey out of hiding; 3) A slow, stalking, serpentine movement in which they stealthily move back and forth from one visual barrier to another until they are within a few feet of their prey before attacking. This species has a very high metabolism and must consume 20% of their body weight daily. Thus, they spend around 70% of the night hunting for food and have a successful hunt every 30-50 minutes. The majority of their diet consists of small mammals and birds, but they will also eat spiders, insects, small reptiles, and occasionally carrion. On average, a single cat will consume 10-14 rodents and birds every night. Small cat species tend to prey on animals that are less than 10% of their body weight, but black-footed cats will sometimes prey on much larger animals such as bustards which are around 30% of their body weight. Black-footed cats have also been observed taking down sheep and goats by hanging from their jugular until it is pierced!

Black-footed cats are nocturnal predators and spend the day in dense cover or in abandoned burrows from springhare, aardvark, and porcupines. They will also seek shelter in abandoned termite mounds, earning them the name “Miershooptier”, which means “anthill tiger” in Afrikaans.

Black-footed cats are completely solitary animals in the wild except for a short period of time for breeding and when a mother is raising young. They have large home ranges for their size (males up to 25 km2 and females up to 10km2). Females have a very short estrus period that only lasts 1-2 days and are only receptive to males for 5-10 hours during that time. This is very short compared to other small cat species which are in estrus up to 6 days and are receptive to males for 3-4 days. With large home ranges and a very short breeding period, the black-footed cat has an effective vocalization that carries over long distances to help locate one another. The male emits this loud, deep call repeatedly during the breeding period. Scent marking also increases during this time and a male will spray his territory on average 100-200 times a night, with some males spraying up to 600 times in 1 night! Females also mark their territory during this time and will spray up to 100 times a night. Female black-footed cats can have two litters annually under optimal conditions, but generally only have 1 litter per year. Gestation is 63-68 days and they will give birth to 1-4 kittens, with an average litter size of 2. Mothers rear their young in burrows and frequently change den locations. At birth, black-footed cat kittens only weigh 60-90 grams, but they develop quickly. Kittens can crawl and hold their head up the day they are born and their eyes open as early as day 2. By day 4, mothers return to their normal hunting routine and leave the kittens for up to 10 hours a night. Kittens begin to walk effectively at 2 weeks and can climb at 3 weeks. Their teeth start to come in at 2-3 weeks and they will show interest in solid food around 4 weeks. Kittens are weaned at 2-3 months and the mother will start to bring live prey back to the den. The kittens mature at an early age becoming independent at 3-4 months and reaching sexual maturity between 8-12 months of age.

Black-footed cats are very secretive in the wild and most of what is known about them comes from a few on-going field studies. Current population estimates are around 10,000 in the wild, but that number is decreasing. Major threats to their survival are deforestation, overgrazing of livestock which leads to a reduced prey base, and indirect poisoning. Black-footed cats are listed as a vulnerable species by the IUCN. In captivity, they have very specific habitat requirements and are a difficult species to manage. Currently, there is a Species Survival Plan (SSP) for the black-footed cat in North America which consists of 53 cats in 18 facilities. The SSP has plans to expand that number to help reach a sustainable captive population. Fossil Rim is now a part of this breeding program and we hope to make a difference in the conservation of this species. So, help do your part by supporting Fossil Rim and come on out for a behind-the-scenes tour to see our new black-footed cats in person.