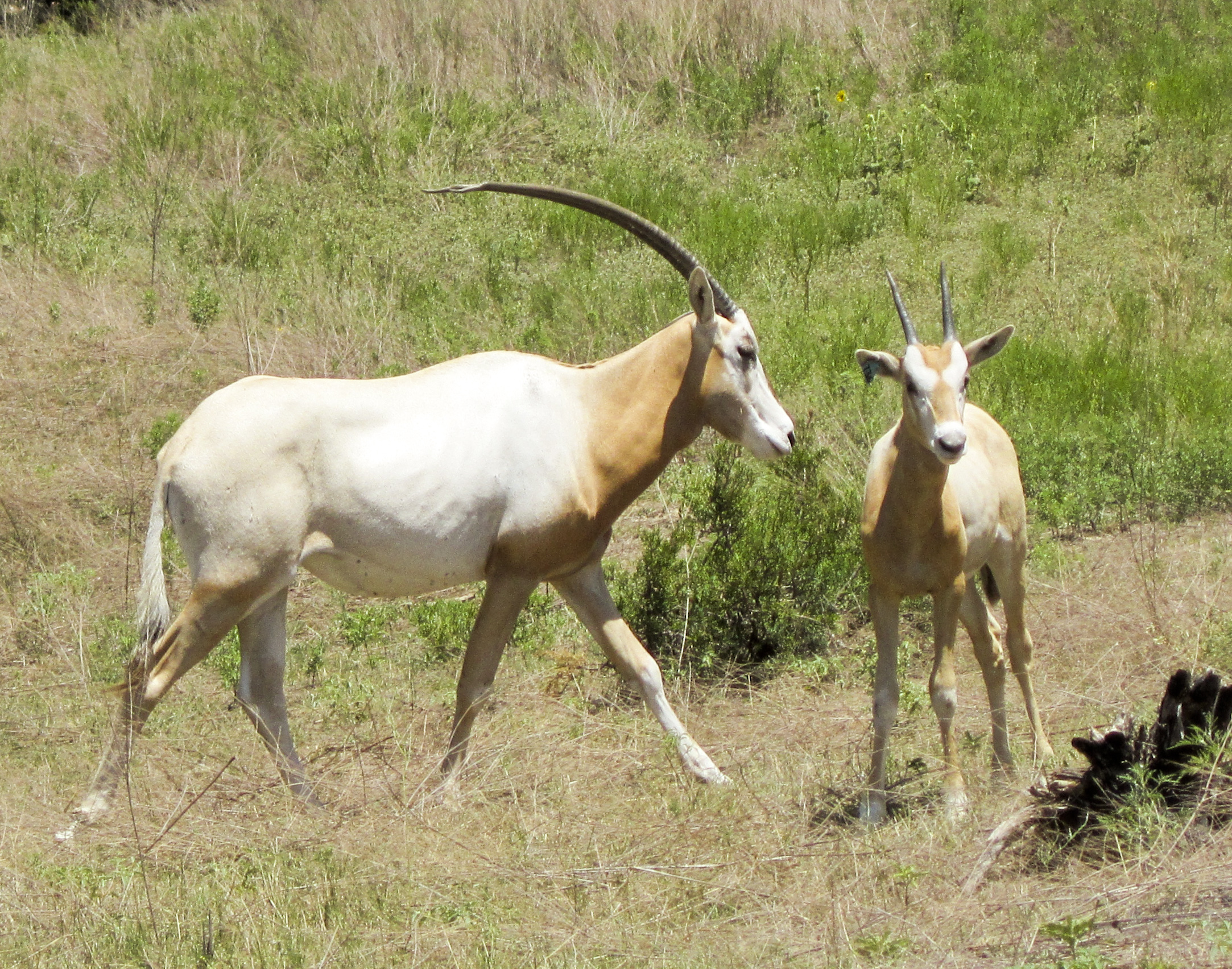 In addition to caring for the animals on our property and doing various research studies onsite, Fossil Rim also contributes to research projects around the world. One such study was headed up by a scientist at the Zoological Society of London who works closely with the Sahara Conservation Fund. Fossil Rim was asked to provide photographs of addax and scimitar-horned oryx calves as they grew in order to study horn length at known ages. This will allow scientists to look at addax or scimitar-horned oryx in the wild or in large African preserves and better estimate how old calves and juveniles are.

Estimating the ages of animals can help determine the seasonality and frequency of calving for these species. For addax and scimitar-horned oryx, females can give birth to one calf after an 8 or 9 month gestation (pregnancy) period. If researchers have a photo of a group of wild addax that includes a few adult females, a few one-year-olds as well as a couple two-year-olds, then they could guess that those adult females have given birth during each of the past two years. It would be good news to see that these animals are breeding annually and that several offspring have survived. Additionally, knowing the distribution of ages helps researchers understand the population structures for wild herds; they can assess whether offspring are being born and surviving in order to replace adults that die off. By estimating the age of the calves, researchers could also guess the month of breeding and birth, allowing them to learn more about if births are seasonal or year-round.

There are estimated to be less than 300 addax in the wild and scimitar-horned oryx are extinct in the wild. Some scimitar-horned oryx have been introduced into large protected areas in northern Africa and there are future reintroduction plans in Chad through cooperative efforts by the Sahara Conservation Fund and the Environment Agency of Abu Dhabi.

Fossil Rim gathered nearly 400 photos during a 3 year period to contribute to this research project. Photos were taken of calves every few weeks for the first several months; then photos were taken every few months until the animals were 2-years-old. After that point, photos were taken every six months. It was impressive to see how quickly these antelope grow in body size and horn length, and to have a series of photos at known ages (to the day) for numerous individuals of each species.

Below is a series of photos showing how an addax’s horns grew during her first 2.5 years.

Fossil Rim hopes that our photos can be helpful in creating a standardized set of criteria for estimating addax and scimitar-horned oryx ages. As many of these animals are observed at a distance in the wild, horn growth (length and shape) is a helpful characteristic to compare between animals. Fossil Rim is dedicated to the conservation of species in peril, both through our captive breeding programs and our cooperation with international conservation efforts.