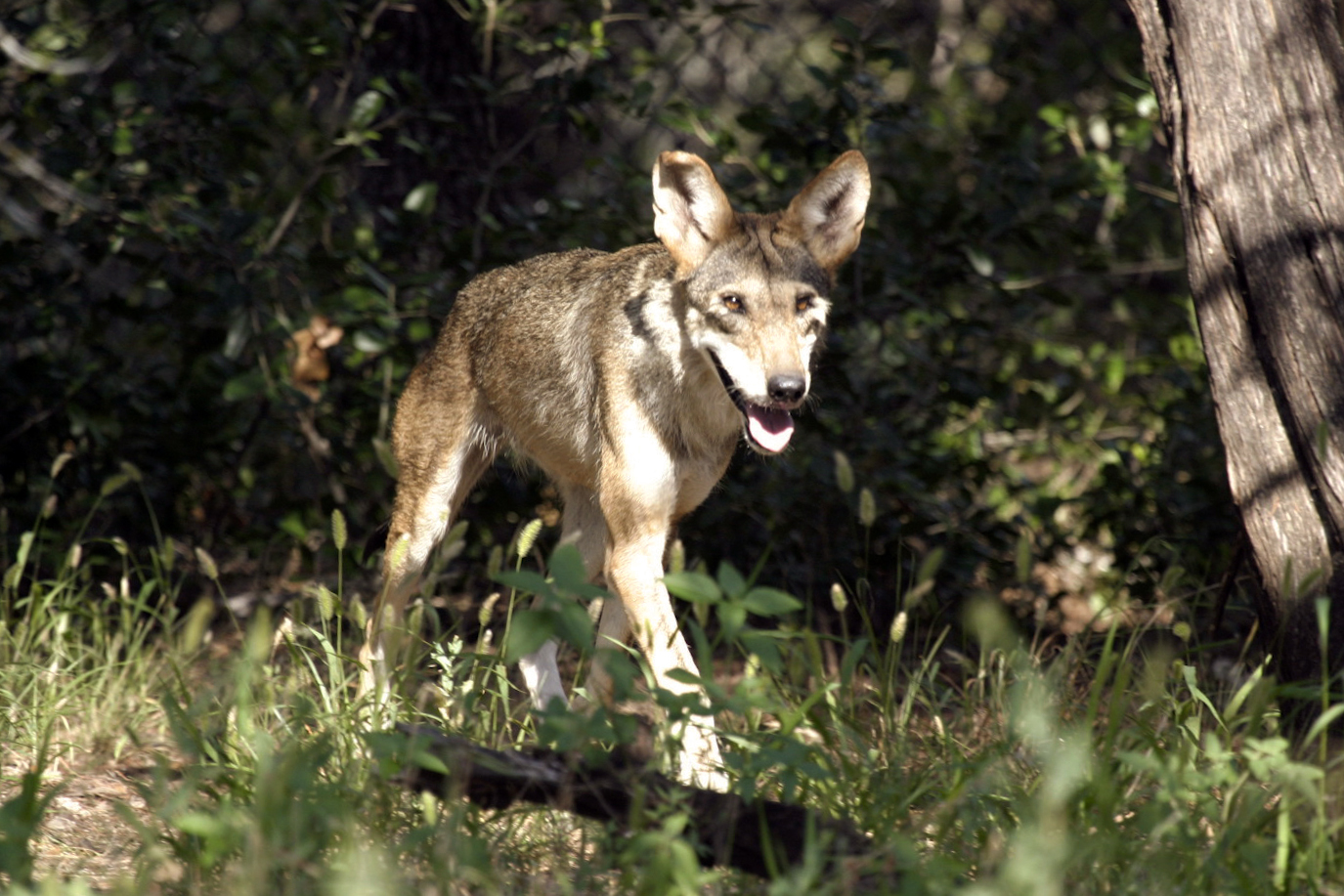 Fossil Rim is home to three different species of wolves, all which have their own unique characteristics and histories. They are all facing a tough time in the wild and here at Fossil Rim, we are dedicated to help increase their population numbers and ensure that they live a happy and healthy life while they are here with us. All of our wolves are housed in our Intensive Management Area, which is only viewable by special guided behind-the-scenes tours. Come take a look at our amazing wolves on one of these tours, and in the meantime, read up on these three incredible species.

Maned wolves are the fourth largest canid species worldwide and are very unique in nature, so unique in fact, that they have their own genus. They are sometimes described as “a fox on stilts,” because of their red rusty coat and long black/dark brown legs.

They get their name from the black “mane” down the back of their neck to their shoulders, which will stand on end when scared or threatened, making them look bigger than they actually are. Maned wolves stand about 3 feet tall and weigh 50 to 60lbs. They have a “pacing” gait in which their front and back legs on one side move in unison. This is a unique trait only found among these canids. In the wild, maned wolves eat a variety of items ranging from fruit, insects, birds, rodents, and even small deer. One of their main food items is the lobeira fruit, which is an everbearing fruit that resembles our tomato. They will search out this fruit for miles while opportunistically eating other items they come across. Maned wolves are solitary in the wild except when they come together to breed and conceive offspring, and because of their solitude, they are rarely sighted in the wild.

There are roughly 5,000 to 7,000 maned wolves left in the wild, and despite efforts from their Species Survival Plan and all participating breeding facilities, there is no release of these wolves back into the wild. There are about 85 maned wolves in the North American captive population in which only 31 facilities house these unique animals. Fossil Rim received their first maned wolves in 1991 and we produced our first litter in 1994. Since that time, there have been 39 maned wolf pups born here at Fossil Rim and we hope to continue increasing this number as the years go on. Currently we have five adult maned wolves and three 10-month-old pups, which are enjoying the cooler weather and have been more active during this time.

Another species of wolf that we have housed here at Fossil Rim in our Intensive Management Area is the Mexican gray wolf. Mexican gray wolves are the smallest of the gray wolf subspecies and they are the most rare and endangered wolf from this group as well. Adults typically weigh between 60 and 80lbs, and have a coat that is mix of white, gray, brown, tan, and black.

These wolves live in a pack of 4-8 individuals with only one alpha breeding pair who will typically breed for life or until they are pushed out by another low ranking animal in their pack. The Mexican gray wolf used to be prominent in southern New Mexico, southeastern Arizona, southwestern Texas, and central and northern Mexico, but was slowly pushed to the verge of extinction due to human conflict in the 1900s. The captive Mexican gray wolf program began in 1977, with huge pushes to also create a reintroduction program for these animals. Over time, this captive breeding program grew with huge success, and in 1998, 11 captive bred Mexican gray wolves were released into the wild in a small area in Arizona and New Mexico. There are now roughly 70 wolves in the wild and about 200 in captive breeding facilities throughout the US and Mexico. Fossil Rim has had Mexican gray wolves since 1990, when we first started to participate in the breeding program, though recently, we have become mainly a holding facility for these animals. As a holding facility, we are able to hold animals that are not recommended to breed or are older in age in order to help other facilities that need space for breeding. At the moment, we have two Mexican gray wolves, an older male who is vasectomized and a female companion for him.

Our last species of wolf is the red wolf. The red wolf is a smaller wolf that weighs between 45 and 80lbs, with a reddish-brown coat, and a very timid personality.

They are the most endangered canid and still continue to struggle in the wild today. Red wolves once covered the southeastern part of the US, extending east to Texas, and as far north as Illinois; today, they live on a 1.7million acre refuge in North Carolina. By the 1960s, the red wolf habitat was continually being destroyed and people were hunting these animals for various reasons, leaving them on the brink of extinction. So with hopes of creating a captive breeding program, more than 400 canids were caught near Texas and Louisiana; but of these 400 animals caught, only 17 were identified as pure red wolves. In 1980, the red wolf was officially declared extinct in the wild and all hope was relying on the captive breeding program to one day be able to release these wolves back into the wild. That time came in 1987, when the captive program proved to be a huge success and their reintroduction program began in North Carolina.

Today, there are approximately 100 red wolves living in this area in North Carolina and 200 in captive facilities throughout the United States. The red wolf still faces problems, including 1) interbreeding with coyotes, which eliminates the pure red wolf genetics; 2) hunting regulations; and 3) an official review of this recovery program by the United States Fish and Wildlife Service, which could potentially shut down the program and result in having no wild red wolves once again. The decision regarding the fate of the wild red wolves will be decided sometime early next year because the USFWS received over 47, 000 comments during the comment period and needs some more time to thoroughly evaluate them. Here at Fossil Rim, we have been a part of this red wolf program since 1989 and have produced 31 pups since 1990, with hopes of adding to that number in the spring with the recommended breeding of the one pair of red wolves that we have now.

Come on out to Fossil Rim and discover more about these amazing animals!