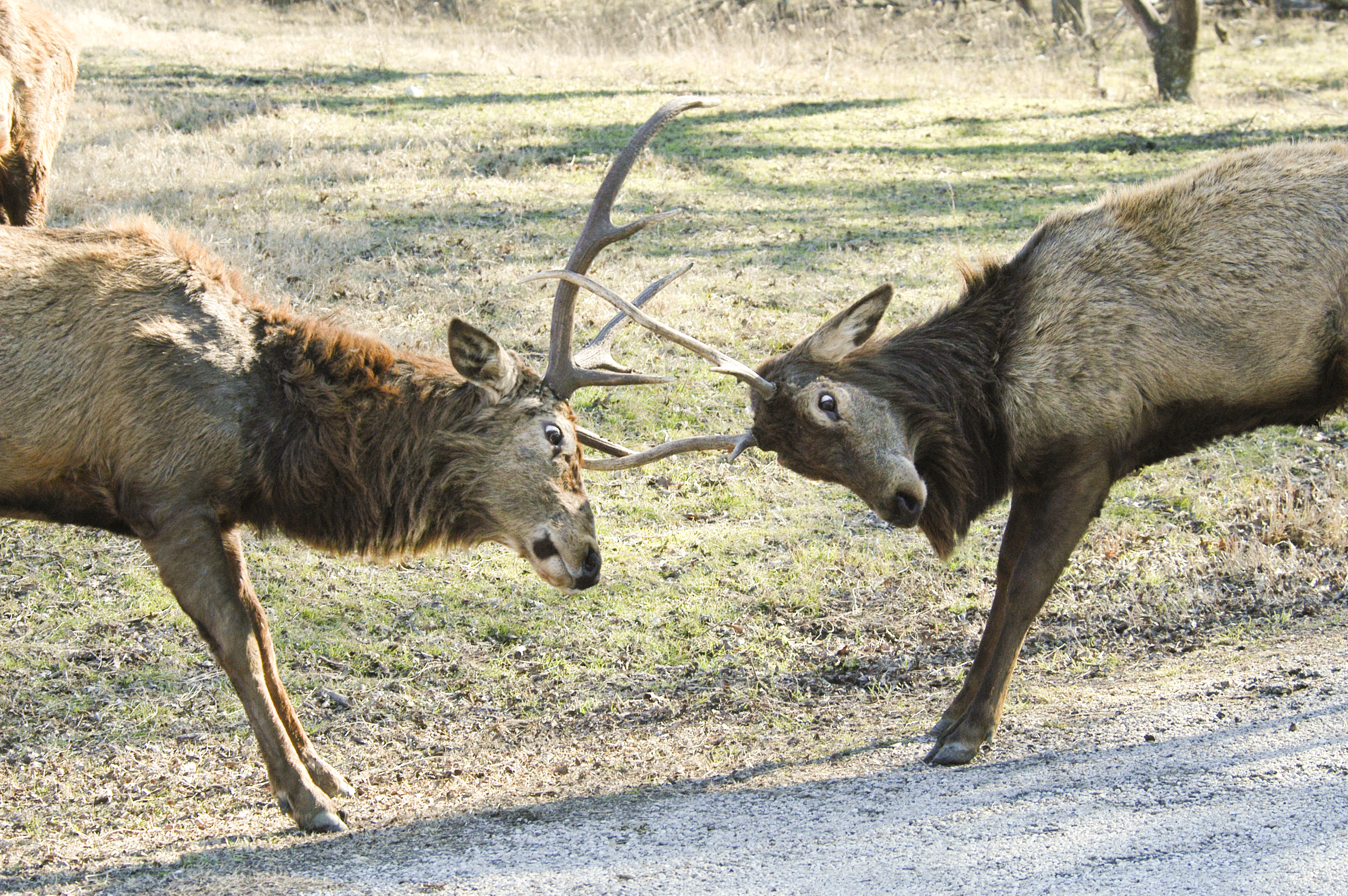 One of the most common animal-related questions we were asked during Spring Break was in regard to antlers and horns. While these two terms are often used interchangeably in common vernacular, they actually are distinctly different.

We’ll start with antlers. Only deer species (the family Cervidae) grow antlers, and in nearly all species only the males grow antlers. (The exception is that female caribou also grow antlers.) Antlers are a bony structure that males grow every year and then they “shed” them, meaning they fall off. The antlers will typically grow back larger the next year; however, when an animal gets old, their antlers will begin to grow back smaller than in their prime years.

Antlers grow in an interesting way. The pedicle is the area on the deer’s skull that the antler grows out of. As the bone tissue begins to grow from the pedicle, it is covered by a hairy skin layer called ‘velvet’. The velvet helps blood and nutrients flow to the growing bone, and antlers are spongy and fairly fragile during their velvet stage.

The antler continues to grow and branch for several months, and the spongy bone exterior is mineralized into compact bone. When the antlers reach full size, the blood flow to the velvet is cut off and the velvet and antler die. The deer then scratches the velvet off using trees or other hard surfaces, and it is normal to see blood on the antlers during this process. Male deer use their antlers to fight each other and defend their territory and females.

After the breeding season, the deer shed their antlers. This occurs because special cells (osteoclasts) break down the bone where the pedicle meets the antler. The antler is then weakly attached and can fall off. In many deer species, the next set of antlers will begin to grow back shortly after the old set falls off. For most deer, antlers grow in the spring and summer and reach full-size in the fall.

Then in the winter the antlers fall off. This is true of the red deer, fallow deer and white-tailed deer at Fossil Rim.

However, the axis deer do not follow this seasonal pattern and antler growth varies among males within the species.

Horns are structurally different from antlers and are permanent (they do not fall off and regrow like antlers). In antelope, cattle, goats, sheep and other members of the family Bovidae, males have horns, and in many species females also have horns. Horns consist of a bony core covered by a keratin sheath. Keratin is the same protein that fingernails and hair are comprised of. A horn’s core consists of live bone, unlike the dead bone of a fully-grown deer antler. Also unlike antlers, horns do not branch; but horns do vary in size and shape depending on the species. They can be straight, curved or spiraled in shape and can be smooth or ridged in texture.

A calf is not born with horns (I’m sure their mothers are grateful for that!) but within a month their horns will begin to grow. The horn will continue to grow throughout the animal’s life.

If a horn breaks off, it will not grow back from the tip, although the base can continue to grow if the break wasn’t too close to the base. Due to the fact that horns are live bone, broken horns will bleed and animal care specialists keep a close eye on animals that have recently broken their horns to make sure the bleeding does stop and other complications don’t develop.

Males have thicker horns and use them for fighting and competition over females. However, females can be quite aggressive and will use their horns for defense, especially when they have a calf. While antelope may not look as intimidating as carnivores, their horns can be quite dangerous and antelope are not afraid to use them!

By this point, you’re probably asking where rhinos fit in. Rhinos are not bovids; they’re actually more closely related to horses. Therefore, rhino horns are not true horns and there are several differences from an antelope’s horn. First, rhino horns do not grow out of the same part of the head as bovids’ horns do. Bovid horns grow from the top of the head near the ears while rhino horns grow just above the nose. Second, rhino horns are comprised almost entirely of keratin protein; there is no bone in the horn itself. A rhino’s skull has a slightly raised cone-shaped region that the horn will grow from, but the horn itself is not bone. There aren’t any nerves or feeling in the horn, and rhinos rub their horns on various objects to shape them. Some rhinos have long horns while other rhinos file their horns down to shorter lengths. A rhino’s horn will continue to grow all of its life; if it is cut off, the horn will grow back. It is a very similar process to the regrowth of hair and fingernails after a trim.

Giraffes also are not bovids, but they do have a pair of horn-like growths on their heads called ossicones. These growths begin as cartilage on the fetus, so giraffes are born with ossicones. They are covered with skin and hair and the cartilage will ossify (harden) into bone as the giraffe matures. While all giraffes have a pair of ossicones, in some species males can develop a second pair.

One more interesting animal is the pronghorn, a species native to North America that resembles an antelope but is actually part of the family Antilocapridae. Their horns are somewhat of a blend between bovid horns and deer antlers. First, pronghorns have branched horns. More specifically, the bony core of the horn is straight but the keratinous sheath branches. The horn composition is like that of a bovid, but the branching is like a deer’s antler. Second, a pronghorn sheds the keratinous sheath each year and it regrows; bovids do not shed their sheath and deer shed the entire antler annually. While Fossil Rim does not have pronghorns, they were too interesting not to mention!

As you can see, there are many differences between antlers and horns. Next time you visit Fossil Rim, we encourage you to take a closer look at each of our species and see how truly diverse they are, not just in size and color but also in antlers and horns.

4 thoughts on “Antlers vs. Horns”