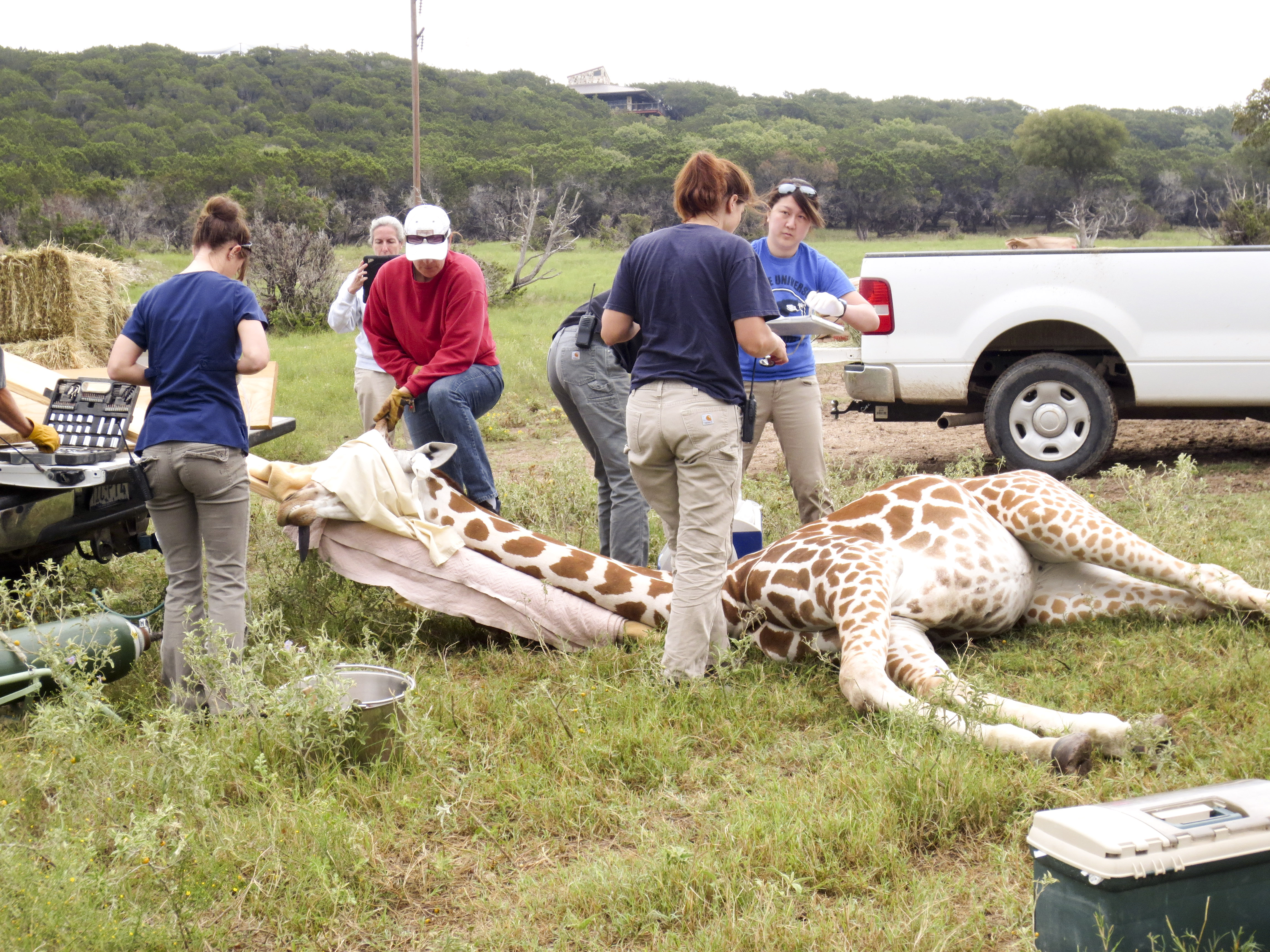 In the preceding entries you learned about capture and handling techniques that don’t require drugs.  So, what’s the deal, why do we even need chemical immobilization? Well, we use it mostly for safety, both the animal’s and care giver’s, and often it is needed just to get near an animal.  Big pastures are awesome. Lots of space allows our hoofstock species to do normal things, like they would in the wild. But when the vets need to examine a patient with their hands on it, say to suture a wound or help with a difficult delivery of a calf, or an animal needs to be transported to another area or zoo, we often have to use remote delivery of immobilization drugs to tranquilize the animal safely.

A number of different types of darting systems are available, but most incorporate a projectile dart that is shot from a special gun.  On impact the dart injects the prepared dose of drugs via gas pressure or a gunpowder charge.  Fossil Rim Wildlife Center routinely uses three types of remote delivery systems, including a rifle with gunpowder fired and gunpowder charged metal darts (as shown in Image 1), a CO2 powered pistol with plastic air charged darts (as shown in Images 2 and 3), and a good old fashioned blowpipe with plastic air charged darts.

Another fantastic tool used for closer range delivery of immobilizing drugs, antibiotics or vaccines, is a spring loaded pole syringe (image below). Its use requires the animal to be within about 6 feet of the person administering the drugs.

Each situation requiring the use of chemical immobilization is considered in light of what technique will provide the safest and most effective delivery of the drugs. For example, the majority of the hoofstock species require darting at long range (up to 50 meters), and therefore the rifle is most appropriate.

For smaller bodied animals like cheetah, coatis, and wolves, blow darting is the best technique, as it causes very little dart associated trauma and these species are conditioned to come into smaller areas so they don’t require the long range capability of the dart gun. Cheetah also tolerate the pole syringe well, and when used appropriately, is more consistent than the blow pipe. The CO2 pistol is used in the smaller enclosures where ranges are shorter and with the giraffe since they are usually accustomed to coming up closer than some of the other hoofstock species. Additionally, the pistol accommodates very large darts, needed for the large drug volume used for giraffe.

Rhinos are typically trained to perform several behaviors, including the presentation of a forelimb. In this case, a rhino can usually be hand injected, just like a person getting an injection from their doctor, but sometimes may require pole syringing or darting if they are not conditioned or are apprehensive.

No chemical immobilization is taken lightly, due to the possibility of complications that could include physical injury during the induction or recovery period or physiological complications from the drugs themselves. For example, the veterinarians may decide to monitor a lameness in an animal like a giraffe for a few days instead of immobilizing it right away for diagnostics. Giraffe are large animals with unique physiology (like really high blood pressure at the level of their heart) that can change significantly when drugged and lying on their side. Special animals require special preparation and handling. For example, during a giraffe immobilization the neck and head are stretched out on a padded board or ladder that is tilted on an angle to the tailgate of a truck. This serves two purposes: it helps to keep the neck muscles from kinking or cramping, which can be life threatening, and helps maintain adequate blood pressure to the kidneys by keeping a large volume of blood from pooling in the long jugular veins of the neck.

Special animals also require special drugs. To deliver an appropriate dose to a large, cantankerous animal remotely, we need something that is potent and of small volume. Ideally, the drug would also take effect very quickly, stopping the animal before running out of sight, and it would also be reversible. The class of drugs that fits this most closely is the ultra-potent opioids. They act fast to induce anesthesia and also give pain control (important for surgical procedures) and, perhaps coolest of all, they are completely reversible with the administration of the antidote (also called the reversal drug or antagonist). So, once the procedure is done, we give the opioid antagonist and within a few minutes the animal is standing and often ready to assimilate back into its herd, able to interact normally with other animals.

By: Holly Haefele (Veterinarian and Director of Animal Health)