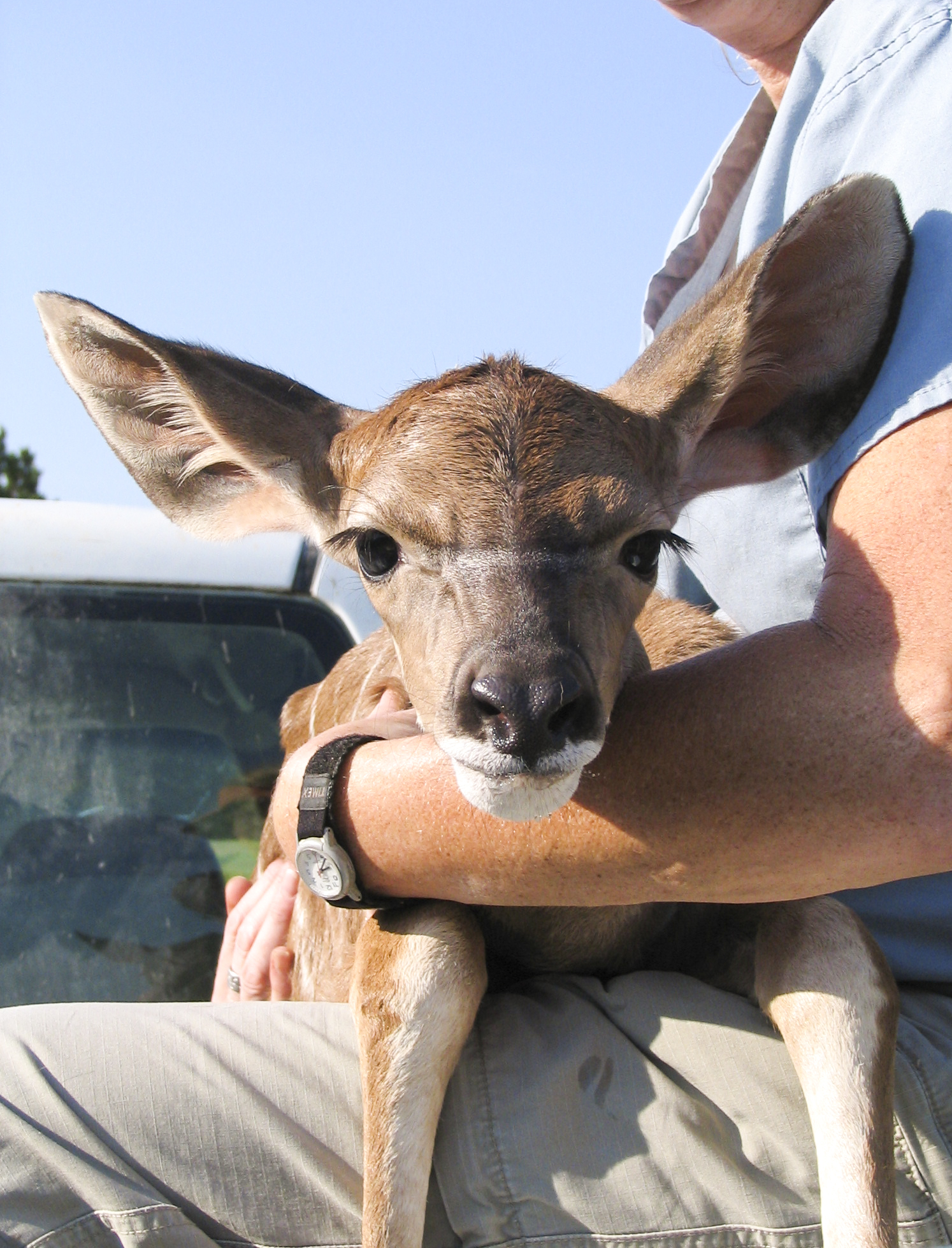 The last blog post was focused on the boma, a tool used to capture a group of animals without sedation. This post will focus on manual restraint utilizing various tools and techniques.

Fossil Rim houses over 1,000 animals so we are often required to handle animals that are sick or injured, or for management purposes. Certain species can be caught by using manual restraint, including most neonates (newborns), Attwater’s prairie-chickens, cranes and some of the carnivores/omnivores.

Animal care specialists who are familiar with the species can often capture these animals just by manually restraining them, without the need for chemical immobilization. Each procedure requires staff to know the species’ defense systems and protection is based on that knowledge. For instance, cranes will instinctually attack the eyes of a perceived threat, so protective eyewear is used when handling cranes. Similarly, carnivores bite and scratch, so thick gloves are worn; antelope and deer will try to horn or kick, so when attempting to handle their calves, we often use a metal shield to protect us from the mom.

Additionally, there are a variety of special tools that we use to assist in the capture of some species—including nets and safe-capture poles. Small birds, some carnivores, cranes and neonates who evade hand-capture can be caught using a net and then manually restrained.

When capturing wolves, trained staff members enter the enclosure and confine the animal inside his house. The wolf can then be restrained with a net or safe-capture pole. A safe-capture pole consists of a padded loop that is threaded through a long pole; the loop size can be adjusted from the opposite end of the pole, keeping the staff member a safe distance from the wolf’s head and sharp teeth. The loop can be placed over its head and secured to prevent the animal from moving away. Some procedures can be completed simply by restraining the animal with the pole or net—vaccinations, visual inspections, or if the animal needs to be transported, it can be placed in a crate that is a suitable size for that species.

If more intensive work needs to be done, our veterinary staff can easily and safely chemically immobilize the animal for blood collection, x-rays, and annual physical exams, which include weighing and documenting medical parameters like pulse rate, temperature and respiratory rate.

Another method of utilizing a net is through deployment by a ‘gun’ called a net gun to capture small hoof stock and bird species. A net gun is exactly what it sounds like – a specialized gun that shoots out a net, allowing capture of animals that are up to 20 feet away. Net guns have been used regularly by field biologists for over 20 years all around the world (especially in helicopter capture), but we’ve only been using them at Fossil Rim for about ten years. The net gun can be used to catch smaller species such as aoudad, fallow deer, and blackbuck. We like it for the capture of dama gazelles as well, since they have been challenging to immobilize using chemicals and the net gun is quick, efficient and a safer option for this species. While we don’t use the net gun for birds at Fossil Rim, both the net gun and larger ‘net cannon’ are critical in the study of birds in the wild.

Fossil Rim has also employed a drop floor chute for over 20 years. In the cattle business, head stalls allow for working on the animals. Our animals don’t work that way very well since they have horns and antlers—and they are wild, not domesticated. The drop floor chute is built into our holding pen facilities and by moving the animal through it we can lower them gently into a ‘V’ position. Hooved animals are unable to fight or struggle when their feet aren’t on the ground. This type of restraint is very humane, and allows us to do things that we wouldn’t be able to without it. One of the first applications at Fossil Rim was a long term study to artificially inseminate addax and it was necessary to have our hands on the animals three times a week. It wouldn’t have been possible to do this using chemical immobilization. We also use it to collect blood, treat injuries, perform hoof trims, read TB tests and provide other medical care as necessary.

Stay tuned for the next blog post which will examine various chemical capture techniques for a variety of species.